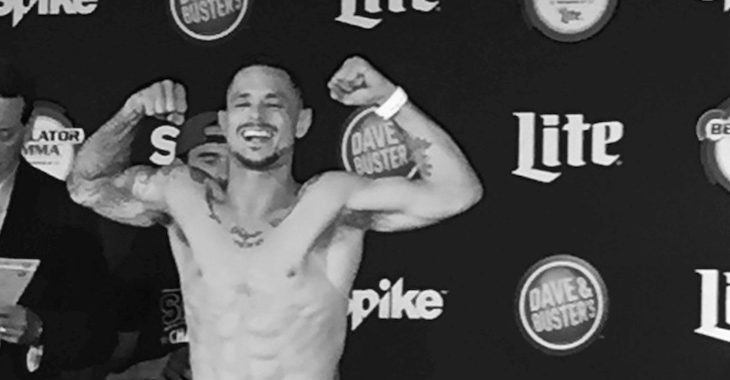 Last week it was announced that Bellator MMA fighter and MMA veteran Chad George would be retiring from competition after nearly 10 years as a professional fighter.

Over the course of his 24 professional fights, George fought under numerous high-profile promotional banners, including Bellator MMA, WEC, BAMMA, and Tachi Palace to name a few.

In 2012 a documentary was released titled ‘Occupation: Fighter’ which followed George as he prepared for arguably the biggest fight of his career, and showed viewers exactly what it takes to be a professional fighter. The documentary quickly climbed the iTunes documentary charts, breaking into the top 10 in the first week, and ultimately amassing over 50,000 views on Netflix within the first 6 months.

George’s final fight was back in April of 2015 under the Bellator MMA banner, where he choked out his opponent with a von flue choke without the referee even being aware that his opponent was out cold.

I spoke to George to discuss his retirement, and what’s next for him in his MMA journey.

“It’s like bittersweet. It’s a weight off my shoulders, but at the same time it’s what I’ve been doing for so long, and it’s kind of weird knowing ‘okay there’s no more fights coming up.'”

As the owner of CMMA Fitness in Gardena California, while George may no longer be competing in MMA, he will continue to stay active within the sport, as well as Jiu-Jitsu, which he plans to compete in at the World Championships.

“I’m starting to train a lot more Jiu-Jitsu now, so there’s no more impact jarring my head, my neck as much. I fell in love with Jiu-Jitsu again the last year and a half. Almost to the same degree as when I fell in love with MMA. So it’s pretty cool that one journey of my Martial Arts career has ended, but another one has just picked up to a complete other extreme.”

While he has had a memorable MMA career, George admitted that retiring was an emotional decision, but that support from fans has made the transition easier.

“When I originally wrote my retirement letter, it was a very emotional thing, I was really nervous about sending it, and I got a little emotional, teary eyed. Now it’s kind of set in because so many people have reached out to me to congratulate me on my career, and thank me for helping them get through whatever thing it’s helped them, and it’s really amazing to see how many people have said that my career has helped them in some way, and that’s really helped me validate my decision for doing what I’ve done in retiring.”

“It’s really amazing to see how people have reacted.”

“I can’t put into words how amazing of a feeling it is to have people reach out from all over the world to give their respect and thanks for me being involved in the sport and I couldn’t have done any of this without the fans, and it’s cool that they’re there for me when I’m closing it off.”

So what is George most excited about now that he’s officially retired?

“The fact that I will never have to cut to 135 pounds again. That is probably the most exciting part about this.”

Despite being retired from MMA, George hasn’t lost his competitive nature, and now has his sights set on the Jiu-Jitsu world, where he has already captured 3 IBJJF no-gi world championships.

“I’m really excited to attack the Jiu-Jitsu world right now, there’s only been two American black belt world champions in my weight class in the history of IBJJF, and the big organizations.”

“I think that if I can dedicate myself straight to Jiu-Jitsu, and really focus like I did on MMA, I believe I can put my name on that list.”

We here at BJPENN.com would like to wish Chad ‘Savage’ George all the best in his endeavors outside of Mixed Martial Arts competition, and look forward to seeing what the future holds for him!

In addition, I would like to thank Chad George for giving myself and BJPENN.com the first interview following his retirement, and for giving me numerous interviews over the course of the last few years.