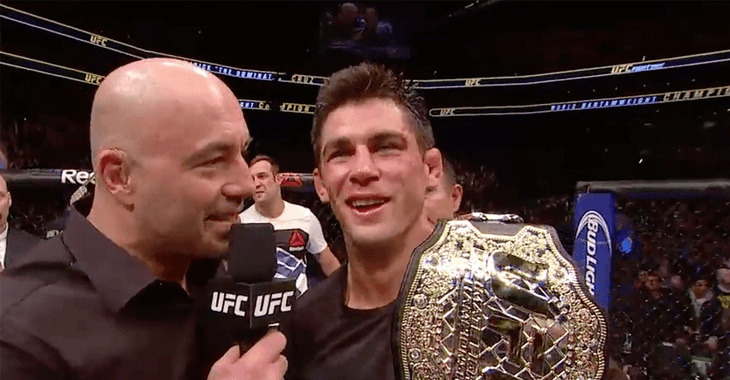 Dominick Cruz didn’t let the punches stop after his five-round fight with T.J. Dillashaw on Sunday. Cruz reclaimed the UFC bantamweight champion title with a split decision win over Dillashaw and threw a stiff jab at fellow UFC analyst Kenny Florian in his interview in the Octagon after being awarded the victory.

The comment was referencing to Florian’s recent suspension by FOX Sports after being called out for plagiarizing work he did on Fox Sports’ website.

Cruz later spoke on the FS1 post-fight show and explained he was just having fun with his friend for picking Dillashaw to win the fight (transcribed by MMA Fighting):

“I gave Kenny a little bit of a tough time, but I love that guy,” Cruz said on the FS1 post-fight show. “He’s got a good brain for the sport. I was just throwing a little jab at him, because he’s my friend and it was funny. But nothing but respect for Kenny, because he is a good guy.”

“It was friendly fire,” Cruz said. “I like Kenny. He didn’t pick me in the fight. He gave me really no chance in this fight, so it was just a little poke. Nothing big. He’s got great hair.”