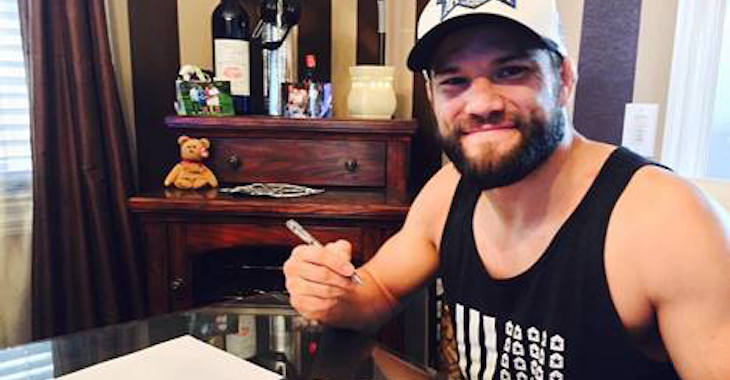 The promotion announced today that they have reached an exclusive multi-fight contract with Thomson. The UFC choose not to renew the top lightweight’s contract and it looks like Bellator wasted no time grabbing him up.

SANTA MONICA (August 11, 2015) – Bellator MMA is proud to announce the signing of Josh “The Punk” Thomson (20-8, 1 NC) to an exclusive multi-year, multi-fight contract. At 36-years-young, the former Strikeforce Lightweight World Champion remains one of the top 155-pounders in the sport, having competed in top organizations including UFC and Pride.

Residing in San Jose, Calif. and training at the renowned American Kickboxing Academy alongside some of the sports very best, Thomson earned his Brazilian jiu-jitsu black belt under Dave Camarillo. In addition to his formidable ground game, Thomson’s striking pedigree is on-point as well, earning a “Knockout of the Night” award for his output in his fight against Nate Diaz in 2013. It’s also worth being said that “The Punk” holds a record of 3-0 in professional kickboxing.

“I had the pleasure of working with Josh in Strikeforce and I look forward to continuing this relationship in Bellator MMA. Josh is a world-class mixed martial artist and we are very happy to be adding him to our roster of some of the best lightweights in the world,” said the promotion’s president, Scott Coker. “Bellator remains fully committed to building its roster by signing top free agents like Thomson, as well as grooming up-and-coming blue-chip stars. We have some amazing matchups in mind for “The Punk” that we hope to be announcing in the weeks to come.”