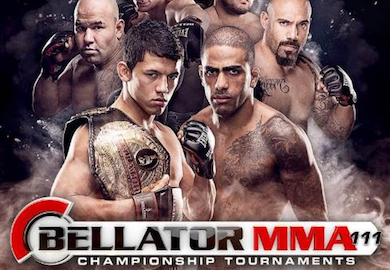 The Bellator MMA Bantamweight World Title will be on the line live on Spike TV from the WinStar World Casino on Friday, March 7th. The night will also showcase the opening round of the Bellator Heavyweight Tournament.

Reigning Bellator Bantamweight Champion Eduardo Dantas will clash with Bellator Tournament winner Rafael Silva in the main event of the evening. Only 24 years old, Dantas holds an impressive 15-3 record, including three highlight reel knockouts inside the Bellator cage and won’t let anyone get in the way of keeping his championship belt.

“I’ve said all along I want to prove that I’m the true Bellator champion, because being the Bellator Bantamweight World Champion is the achievement of a dream for me,” Dantas said. “Rafael and I are friends, but Marcos Galvao and I are like brothers and I know I had a job to do then, and I know I have a job to do now.”

For the veteran Silva, the 28 year old Brazilian enters the title fight riding an incredible 13 fight win streak that includes 10 stoppage wins in the process. Known as one of the best submission finishers in the sport, Silva knows his time is now, and having the Bellator Bantamweight Belt wrapped around his waist is just one win away.

“I love Eduardo Dantas as a fighter and as a person,” Silva said. “We are good friends and I always cheer for him when he fights. I really like this guy. As a fighter he is as good as someone can be, but I know what this fight means to me, and nothing is going to get in the way of that. Nothing.”

The event will broadcast live at 9 p.m. EST/ 8 p.m. CST on Spike TV. The preliminary card will be streamed live and free on Spike.com beginning at 7 p.m. EST/ 6 p.m. CST. Tickets for the event will be on sale Friday, January 10th and can be purchased at Ticketmaster.com or by visiting the WinStar World Casino Box Office.

The event will also feature the opening rounds of the Bellator Heavyweight Tournament. No stranger to the Bellator cage, Ryan Martinez is ready to get back under the bright lights and will take on knockout kingpin Lavar Johnson. Both known for their powerful striking, Martinez will have to avoid the heavy hands of Johnson, who has won 15 of his 17 victories by knockout.

“I am finally 100 percent healed up with my hand and Lavar is a great fight for me,” Martinez said. “He likes to stand up and bang just like me, which makes for an exciting fight and a great opening round. I am just thrilled to be back into the tournament.”

After fighting his way to the Bellator Heavyweight Tournament Final last season, Peter Graham looks for redemption as he faces Mighty Mo in the opening round. Knowing what it takes to get to reach the top, Graham is anxious to make his way back to the finals.

“My sole objective is to stop every fight as early as possible,” Graham said. “Fans should expect absolute aggression and I am looking for the knockout every time. I feel I can beat everyone in the division and I am completely focused on winning the title.”

“I am ready to get back into the tournament and get my belt back,” Volkov said. “I have continued to make improvements in my game and I will prove to the fans why I am one of the best heavyweights in the world. Nothing will stop me from getting the championship belt back.”

Entering his first Bellator tournament, Blagoi Ivanov looks to keep his undefeated record intact, as he faces Rich “Rare Breed” Hale. Coming off of a first round submission win against Keith Bell in November, Blagoi will put his skills to the test in a fight against Hale.

“With Dantas and Silva headlining the card, and a heavyweight tournament stacked with finishers, we’re all in for an explosive night on March 7th from WinStar World Casino,” Bellator Chairman & Chairman Bjorn Rebney said.

Additional fights will be announced in the coming weeks. Please find the most up to date fight card below: