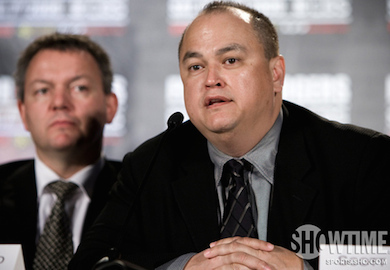 Following a full day or reports, rumors and speculation, the Bellator promotion has announced that Scott Coker will take over as the company’s president.

Coker is a well-respected martial arts promoter who founded the popular Strikeforce promotion back in 1985. The company managed to operate successfully as the number-two MMA Promotion in the world under Coker’s leadership until the UFC purchased the franchise in 2013.

As part of the acquisition, the UFC employed Coker, retaining him from going to a competitor or starting up a new company. However, Coker’s no-compete contract was up this March making him available to re-enter the arena of promotions.

Bellator also confirmed the removal of the season concept and tournament format in favor of a more regular MMA schedule.

In a release, SPIKE TV President Kevin Kay stated, “We are excited to have Scott Coker lead us in a new direction as we evolve the league format from a tournament-based organization to a more traditional model with big fights.”