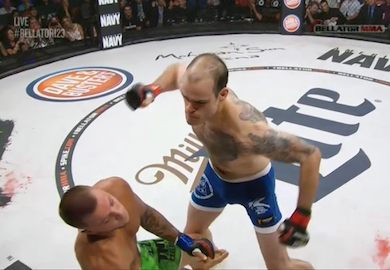 Tamdan McCrory picked up the quickest victory of the night on tonight’s main card with his first round knockout.

McCrory was backed up against the fence for a quick second but caught Ward with a punch that made him back up and wobble. McCrory continued to press forward and dropped him with a seven-punch combination that sent Ward crashing to the mat! McCrory, confident with his win, simply walked away and celebrated before the referee got in the mix.

The referee waved it off after seeing the state Ward was in; he did not even know where he was.

Tamdan McCrory def. Brennan Ward by way of TKO (Punches) :21 of Round 1