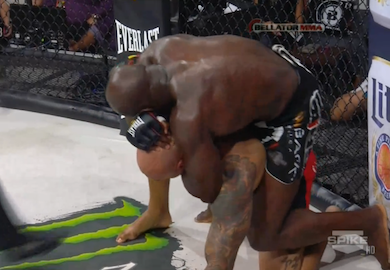 Cheick Kongo picked up his second stoppage in a row tonight against veteran Lavar Johnson.

Johnson stated “This can be a short fight if Cheick Kongo cooperates”, and Kongo refused to cooperate. Kongo ducked and dodged all of Johnson’s wild punches until Johnson eventually overthrew to the point where he fell down. Kongo hopped on top of him and that was the beginning of the end.

Kongo trapped Johnson’s arm in a keylock position and blasted his body with elbows and punches. Once he had enough room, Johnson tried to scramble up to his feet but he ended up giving his back to Kongo. Kongo wrapped him arm around the neck of Johnson and proceeded to lock on the rear naked choke. Lavar Johnson wasted no time in tapping out.

Cheick Kongo def. Lavar Johnson by way of Submission (RNC) 3:27 of Round 1