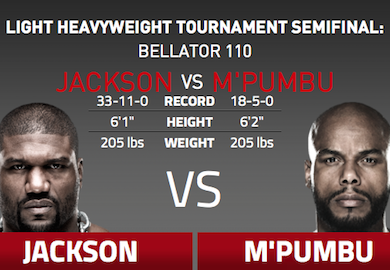 ‘Rampage’ went back to controlling where the fight went and M’Pumbu started to loosen up and throw leg kicks. M’Pumbu tripped after a leg kick attempt and Jackson dove on top of him. Jackson’s right knee pinned M’Pumbu’s left arm to the mat and M’Pumbu’s right arm was attempting to keep Jackson’s body close. Jackson simply postured up and started to pound his right hand into the face of M’Pumbu. M’Pumbu went stiff for two seconds before coming back to, but the referee had seen enough and put a stop to the fight.

After the bout, Quinton Jackson and King Mo met in the cage. Jackson exclaimed King Mo was next and called himself ‘The Man of Bellator’. The two tried to fight, but they were separated by security and officials.

Quinton ‘Rampage’ Jackson and King Mo will fight in the finals of the light heavyweight tournament.

Quinton Jackson def. Christian M’Pumbu by way of KO (Punches) 4:34 of Round 1