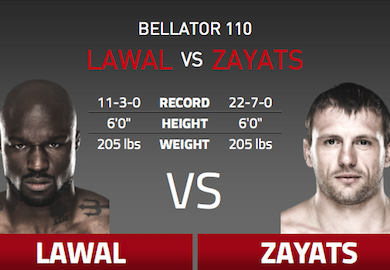 King Mo Lawal showed improvements since his last outings in the Bellator cage. He kept his hands high in anticipation of Zayats’ shots and was more aggressive in controlling where the fight would go. King Mo did a good job in landing shots early on in the fight, but Zayats started to find his range toward the end of the first round.

King Mo returned to his old form in the second round as he started to lower his hands which allowed Zayats to start landing hooks and jabs at will. Zayats constantly changed levels throughout the round by switching between jabs to the body and head of King Mo. Mo, growing tired of absorbing punches, tried to work for takedowns which usually led to nothing fight-threatening.

Mikhail Zayats put on a good performance at the end of the first and all of the second, but he seemingly gassed out at the start of the third round. King Mo’s strategy in pinning his opponent up against the fence and grinding his energy out paid off as Zayats was flopping on the mat after failing takedown attempts. Still, King Mo was unable to take his opponent down in the closing moments of the fight to lock up the victory. The boo-birds in the crowd voiced their disapproval of both men’s performances after the final bell rang.

King Mo Lawal won and advanced to the finals of the light heavyweight tournament.