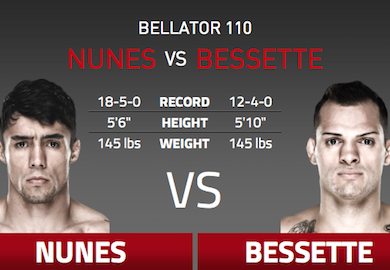 Matt Bessette will be joining Desmond Green in the semi-finals of the featherweight tournament.

The fight opened with a lot of blocked shots from Nunes and Bessette and it was clear they did their homework on each other. Bessette seemed more methodical in his approach of attack while Nunes countered wildly and continuously pressed forward, looking to land a big shot. Whenever Nunes would go long without a strike landed, he would shoot for a takedown and try and ride out the rest of the round. Nunes ended the first and second rounds on top of his opponent, but Bessette gave him some decent receipts throughout the fight.

Matt Bessette dropped Diego Nunes early on the second round and it seemed like it was over for Nunes if Bessette could just land a couple more solid shots. Bessette could not get the deed done and Nunes was fully recovered within twenty seconds of being knocked on his bum.

With Nunes’ takedowns in the first round and Bessette’s knockdown in the second, it came down to the third round once again tonight. Nunes did a good job at controlling the center, working Bessetee’s back to the cage and popping him with a combination before resetting back in the center. Bessette seemed content with counter-punching in the third round and while he did land some good punches, his constant back-peddling likely did not impress the judges. He rocked Nunes with a good right hook and high kick at the end of the round and that may have been what won him the fight

Matt Bessette was awarded the split decision victory and claimed he did not win the first round, but he was confident he won rounds two and three.