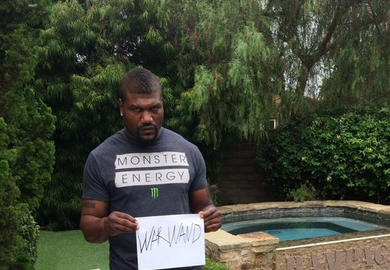 Quinton Rampage Jackson has always been one to express his dislike for the UFC brass. After a long and bumpy relationship, Rampage had his last fight with the promotion against Glover Teixeira in 2013. Shortly after he was released from the UFC, Rampage was signed to Bellator MMA, where he has enjoyed a 3-fight win streak.

Earlier this week, Pride FC and UFC legend, Wanderlei Silva announced his retirement from MMA after he said the UFC tried to turn his fans against him. (Watch his announcement HERE). The announcement prompted Wanderlei supporters to take photos holding signs that read “War Wand”.

Rampage and Wanderlei were rivals in the cage, putting on two superb fights under the Pride banner that saw Silva win both fights, however Rampage took the win in the pair’s third meeting with the UFC in 2008.

Even tho we were enemies in the ring.. i was your fan 1st. I'm with u,and I'm going threw the same pain. #WarWand pic.twitter.com/o52kOf8oYz