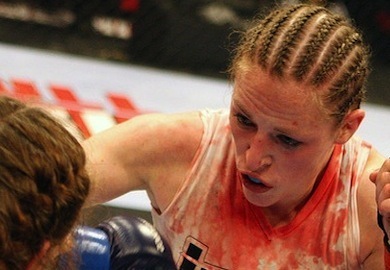 The UFC is once again searching for an opponent to fight Sarah Kaufman at next week’s ‘TUF Nations Finale,’ this after Amanda Nunes was forced to pull out of the match due to a dislocated finger.

Kaufman was initially targeted to fight Shayna Baszler at the event, but she was also forced off the card with an injury.

“The Ultimate Fighter: Nations Finale”, which takes place on April 16, 2014, inside Colisée Pepsi in Quebec City, Canada, is headlined by a middleweight grudge match featuring Michael Bisping taking on Tim Kennedy. In addition, tournament champions will be crowned in both the welterweight and middleweight divisions.