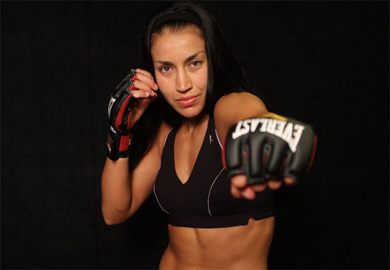 Flyweight (125 pounds) superstar Zoila Frausto Gurgel (12-2) of Cincinnati, Ohio has signed a multi-fight contract with Invicta Fighting Championships and will make her debut for the women’s world championship Mixed Martial Arts (MMA) promotion at its next event on an April date to be announced soon.

“We are thrilled to welcome Zoila, an established superstar in the sport, to the Invicta FC roster and are looking forward! to seeing her compete in our rapidly growing flyweight division,” said Invicta FC President Shannon Knapp. “Zoila has turned in a number of thrilling performances while rising through the ranks of fighters over the last few years, and we are confident that she will help raise the bar of competition even further in the Invicta FC cage.”

The 29-year-old Frausto Gurgel, the wife of former UFC and Strikeforce competitor Jorge Gurgel, is coming off a sensational, 6-1 run in Bellator Fighting Championships action that included victories over rival superstars Rosi Sexton, Jessica Aguilar and submission wizard Megumi Fuji, who entered the Oct. 28, 2010 matchup with Frausto Gurgel with a perfect 22-0 record. Frausto Gurgel edged out a split decision to snap Fuji’s unbeaten run that began in 2004, and become the first Bellator women’s strawweight (115 pounds) champion in history.

During the Bellator stint, Frausto Gurgel also handed Jessica Penne the only defeat of her career before Penne went on to become the first-ever Invicta FC champion at atomweight (105 pounds).

“I am excited to join Invicta FC, where the best women fighters in the world are competing,” ! said Frausto Gurgel, whose 22-year-old sister Stephanie Frausto, also fights for Invicta FC as an atomweight. “Invicta FC has become more than just a promotion – it’s evolved into an entire movement for women’s MMA, and I’m proud to represent that movement while continuing to fight and beat the best opponents out there.”