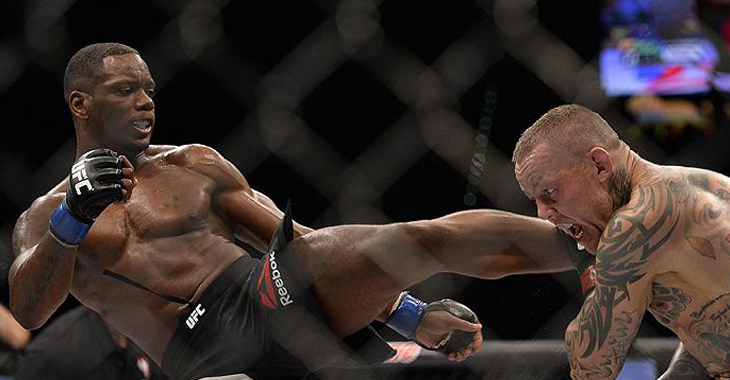 When entering the UFC in 2016 as the 18-1 Bellator lightweight champion, “Ill” Will Brooks had plenty of hype surrounding him(as most champions from outside organizations do). Brooks was on an impressive eight-fight winning streak that included two wins over the former champion, Michael Chandler. Brooks made his debut against Ross Pearson and was able to come away with the unanimous decision victory…and it turns out that it will end up being his only one with the UFC.

Brooks announced today on his Instagram account that he has been released by the UFC and will now be joining the Professional Fighters League and will participate in their million dollar lightweight tournament.

For those of you who have been asking when my next fight is… well, I’m not sure when the next will be but it will not be with the UFC but rather with the @profightleague in the Million Dollar tournament. I’ve been doing this for a while now and I understand the business side of it. I didn’t do the job that was expected of me and like all jobs I was released, rightfully so. Unfortunately, I under performed with the UFC and didn’t achieve the goal I wanted to with that opportunity. I regret nothing, I took a chance at something I wanted and came up short. The fighter/competitor in me is highly disappointed with myself for allowing things to get away from me. The UFC chapter is closed for now… I’d like to thank the UFC staff for treating me so well during my employment. From day one I was treated well and with respect. I appreciate that greatly.
Now with that being said, I am moving forward toward the next chapter. I’m extremely excited and fired up to be part of the @profighteague and their rebirth. The timing is perfect because I’m in my own rebirth process as well. As always I’m going to represent this organization as professionally as I possibly can. I look forward to being a pivotal part of the PFL’s growth in this sport.
All praise and glory to God.
1 I lift up my eyes to the mountains— where does my help come from? 2 My help comes from the LORD, the Maker of heaven and earth. – Psalms 121:1-2

At my highest and my lowest, He’s been with me and seen me through to lands of milk and honey. Thank you God for blessing me with this incredible opportunity for my family and myself.
Now let’s go secure this bag!!!! #Godisgood #hardwork #dedication #mma #ufc #PFL #professional #athlete #Godsplan

After his win over Pearson, Brooks would lose three straight to the likes of Charles Oliveira, Alex Oliveira and Nik Lentz. All three losses came by finish(one TKO, two submissions).

Brooks is still a very talented fighter regardless of his recent misfortune and will surely be the favorite throughout the PFL lightweight tournament unless they can manage to add an even bigger name than Brooks to the bracket.

The PFL has planned tournaments across seven weight classes all for a million dollar prize. No dates have yet to be released for the starts of any of the seven tournaments.