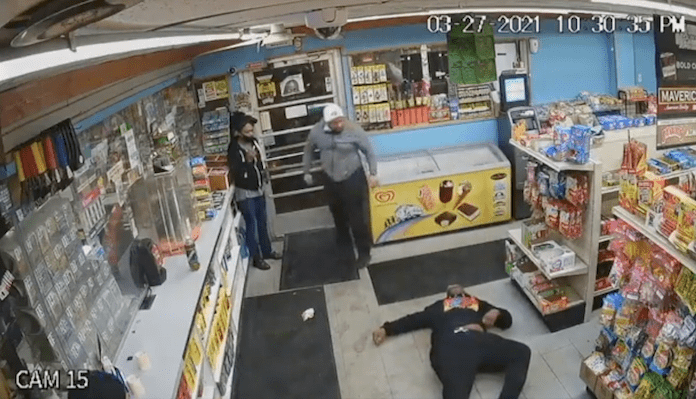 A convenience store clerk one punch knocked out an irate shopper in a viral video that was making the rounds on social media this weekend.

In the video, a customer appears to get into a disagreement with the convenience store clerk. The video does not have any audio, so you can not hear what the two men say to each other, but it is clear there was a major disagreement over something, and it escalated into violence. After the clerk emerged from behind his booth, the customer shoved him. The two then decided to throw down, and the convenience store clerk got the best of the customer as he landed a brutal right hand right down that pipe that knocked him out cold.

It was a heck of a right hand by the convenience store clerk, who appears to have been in quite a few fights during his time, or perhaps he’s just a big combat sports fan. Either way, the clerk was able to land the first blow while his opponent had his hands down. It was a big punch that sent the big man to the floor, though we don’t know what happened next as the video then cut off. Although the customer acted in an unruly fashion, hopefully, no one was seriously injured by the incident. But once again, it’s just another example of how you can not put your hands on people. Just because you think you are bigger and stronger than someone doesn’t mean that they don’t know how to fight back. In this case, the convenience store clerk showed the man that he knew how to fight by landing the big punch. It seems likely this customer will think twice about getting into a fight again.