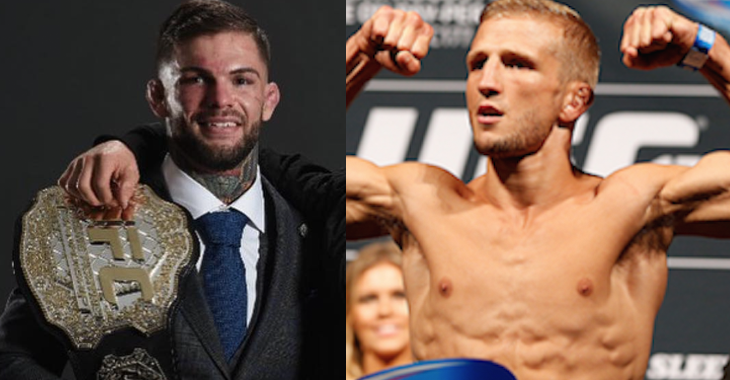 Later this year, bantamweight champion Cody Garbrandt will put his UFC bantamweight title on the line as he faces TJ Dillashaw in a highly anticipated showdown, where he will look to defend his bantamweight title for the first time. The former teammates are currently filming the upcoming season of The Ultimate Fighter, where they will coach opposite one another.

Of course, given the pair’s rivalry, things have been understandably tense on-set, with footage emerging of the champ grabbing Dillashaw by the throat during a verbal altercation. Ahead of the scrap, which has yet to receive an official date, Team Alpha Male top-dog Urijah Faber spoke to Submission Radio to break down the fight, saying:

“Both of these guys are very, very tough. I think the thing that’s the difference, I mean, TJ, when he was training with us he was training with the best guys in the world. When he was here, I was ranked number three in the world, Cody was giving him all he could handle every single day – I won’t talk about what happens in practice necessarily, but we’ve got Chris Holdsworth, we got Chad Mendes, we’ve got on and on and on and on. It was like iron sharpening iron. There’s no doubt that TJ’s missing a lot of that. On top of that, a lot of people don’t understand Cody’s pedigree of wrestling. He didn’t wrestle in College because he became a fighter, but he was a guy that placed third in high school nationals – which is incredible, especially taking into account that he didn’t wrestle as a junior and senior in school due to issues with his coach and things like that. So this guy’s a talented grappler and then he’s got those hands that are some of the most dangerous in the division. So I think it’s gonna be a very competitive fight, but I think that the edge, especially now, is with Cody the champ.”

Only time will tell which man leaves the Octagon with the bantamweight title.