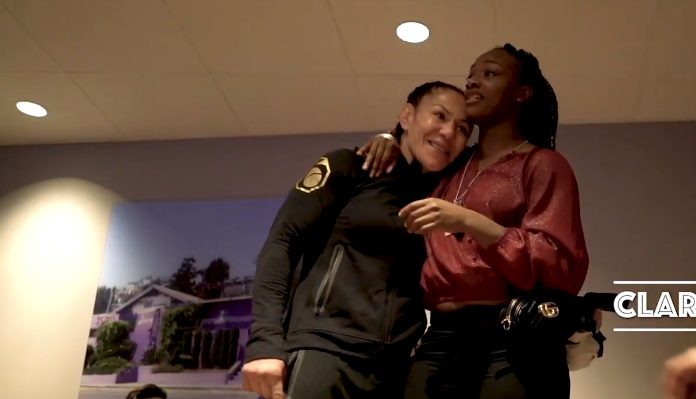 At UFC 232 this past Saturday night, we witnessed the first ever female super fight take place when the UFC featherweight and bantamweight champions met inside the Octagon.

Those two, of course, being none other than the legendary 13-year unbeaten Cris Cyborg and legacy paving ‘Lioness’ Amanda Nunes.

It was expected that this fight would be Cyborg’s toughest of her 23-fight career but despite this, many still thought she would be able to pull out the win.

However, Nunes came in ready to play spoiler once again as she’s done so multiple times in the past. And that she did.

It Nunes only 51-seconds to knockout the greatest female fighter of all time, thus stealing that label and making it her own as the first ever woman to hold titles in two different divisions.

After the fight, Cyborg found herself consoled in her locker room by her friend, multi-time world boxing champion, Claressa Shields who would give her some words of encouragement.

“Cris. What the f*ck?” Shields asked when entering the locker room at UFC 232 (via the Cris Cyborg YouTube channel). “I’m not mad about the loss. I’m mad because you know how to f*cking box and you shouldn’t have been out there just trying to brawl. What would you do that for? No. You f*cking jab with me, jab with her short ass. What the f*ck? Anyway, still proud of you. Rematch?

“F*ck her up. Next fight, go out there use your jab, she can’t f*ck with you. She got lucky. That sh*t happens.”

Shields is a two-time Olympic gold medalist in boxing and has trained with Cris Cyborg in the past before. Videos of their sparring sessions went viral around the time that they were released.

Do you believe we’ll get to see Cyborg and Nunes run it back?