In the main event of UFC Vegas 50 on Saturday, top-10 light heavyweights collided as Magomed Ankalaev took on Thiago Santos.

Ankalaev entered the fight as the sixth-ranked light heavyweight and was on a seven-fight win streak with wins over Volkan Oezdemir, Nikita Krylov, and Ion Cutelaba among others. Thiago Santos, meanwhile, returned to the win column in his last time out as he beat Johnny Walker by decision to snap his three-fight skid.

In the end, it was Ankalaev winning a rather lackluster decision as both men were tentative to throw. But, even though Ankalaev got the win, it was Santos who had the biggest moment of the fight as he dropped the Russian but he couldn’t capitalize on it. Following UFC Vegas 50, here is what I think should be next for both Ankalaev and Santos. 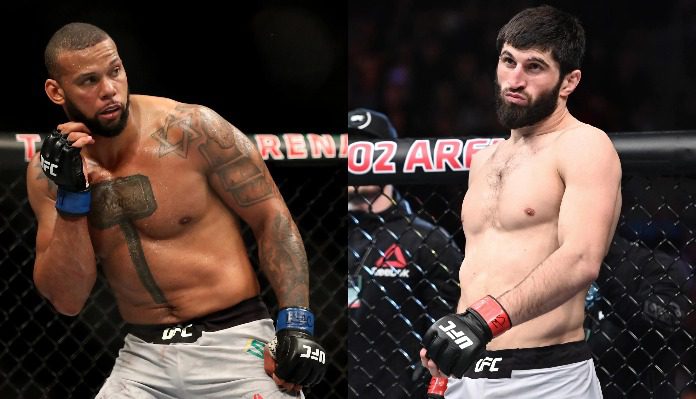 Magomed Ankalaev has looked like the real deal at light heavyweight as he is well-rounded and has a good ground game. But, in his first UFC main event, he left a lot of people disappointed as he didn’t go out and finish Santos but still did enough to get the win.

After the win, Ankalaev called for the title shot which I don’t think he gets. The next title shot will go to the winner of Jan Blachowicz-Aleksandar Rakic which they are looking to rebook.

With that, a logical next fight is to take on Anthony Smith who is ranked fourth. The winner of that would then likely fight for UFC gold and it’s a scrap that can headline a Fight Night card in the spring or summer.

Thiago Santos is now just 1-4 in his last five and has had back-to-back lackluster main event fights. Since his double knee surgeries after his split decision loss to Jon Jones for the belt, he hasn’t looked the same as the explosive power is not there.

At this point, Santos is a gatekeeper of the light heavyweight division but remains a big name that can be thrown in main events. He didn’t take much damage so can return in the next few months and when he does, a Fight Night main event against Jamahal Hill should happen. Hill is on the rise and if he can go out and beat Santos he would be right in the title picture while if the Brazilian wins, he could start fighting people ranked above him again.

What do you think should be next for Magomed Ankalaev and Thiago Santos after UFC Vegas 50?