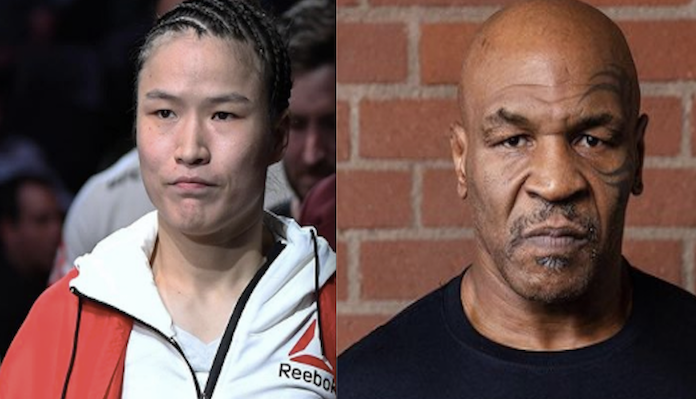 Zhang returns to the Octagon at UFC 261 on April 24 when she takes on Namajunas in a fight that’s been in the works for months now. Zhang hasn’t fought since last March at UFC 248 when she won a split decision in a classic war against Joanna Jedrzejczyk. Namajunas, meanwhile, is coming off of a split decision win over Jessica Andrade. They are the two top-ranked women’s strawweights in the world right now and this fight should be fantastic.

While most people are expecting a close, competitive fight, Tyson isn’t. Speaking with UFC president Dana White on a recent edition of the “Hotboxin’ With Mike Tyson” podcast, Tyson made a comment suggesting that Namajunas would “destroy” Zhang. The UFC women’s strawweight champion took offense to the comment and in an interview with China Global Television network (CGTN), she took aim at Tyson for his comments.

The champion was not thrilled with what she heard from Tyson in the interview with White. Zhang will not let Tyson’s comments deter her from her goal, which is to go into the Octagon and beat Namajunas, defending her crown as the top woman at 115lbs. Zhang credited her opponent for her skills, saying that she is taking Namajunas very seriously.

“She has great footwork and boxing skills. I have prepared specifically for her skill set. I will check my arsenal and pick the suitable weapon to play against her. I know that anything could happen,” Zhang said.

Who do you think wins between Weili Zhang and Rose Namajunas at UFC 261?