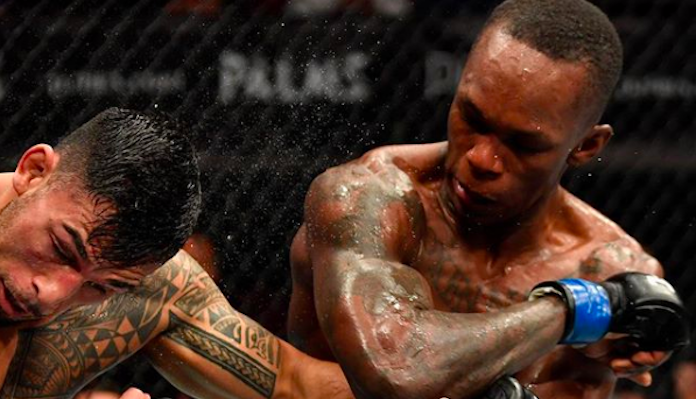 So many times before, we’ve seen massively hyped fighters stumble as the near the proverbial mountaintop. Surging UFC middleweight contender Israel Adesanya, however, could not have looked  more surefooted in his massive UFC 230 showdown with missile-fisted wrestler Derek Brunson.

Ahead of the fight, it was easy to imagine a world where Brunson repeatedly took Israel Adesanya down and mushed him through the chainlink so forcefully that the he oozed out the other side and onto the commentary booth in diamond-shaped chunks. But this isn’t the way it happened. Instead, Israel Adesanya shut down his foe’s takedown attempts, and forced a firefight on the feet, where he reduced Brunson to rubble with some of the slickest, most pinpoint striking we’ve seen in the Octagon.

In other words, he announced his status as a bona fide middleweight title contender in the loudest way possible.

Yet with UFC middleweight champ Robert Whittaker currently gearing up for a title defense opposite Kelvin Gastelum, Israel Adesanya will probably have to take at least one other fight before he seemingly inevitably fights for gold. So who, pray tell, should the UFC match him up with next?

Undefeated Brazilian juggernaut Paulo Costa was briefly expected to fight Yoel Romero at UFC 230, but this matchup was scrapped before it ever became official. While Costa has since assured that he plans to wait for the opportunity to fight Romero, he’d likely have a tough time turning down a fight with the massively hyped Israel Adesanya. And while he would definitely be at a technical disadvantage in this fight, he’d simultaneously enjoy a massive size and power advantage, which would actually make the matchup quite compelling. The two undefeated middleweight contenders seem like they’re on a collision course. Why delay the inevitable?

Anderson Silva is a free man. After a lengthy, USADA-administered sit, the former UFC middleweight champ and fixture of the MMA pantheon is now free to fight again.

As luck would have it, Israel Adesanya has said that Anderson Silva — along with Jackie Chan and the movie Ong-Bak— is part of the reason he got into combat sports in the first place. While he clearly has immense respect for the middleweight legend, he’d almost certainly jump at the chance to fight him.

Why not let these two laser-precise strikers share the cage?

Although Jacare injured his arm in his fight with Weidman and is definitely going to need some time to heal up, he looks like a logical next step for the red hot Israel Adesanya. Would he be the latest man to deflate amid the Nigerian’s puncturing strikes, or would he score yet another devastating finish at the rising fighter’s expense? As ever, there’s but one way to find out…

Who do you want to see Israel Adesanya fight after UFC 230?