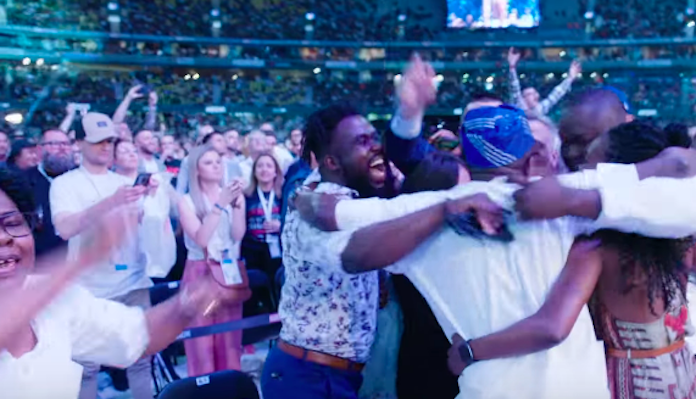 Last weekend, in the main event of UFC 243 in Melbourne, Australia, Israel Adesanya captured the UFC middleweight title with a second-round stoppage of Robert Whittaker. To say his friends, family and training partners were excited about his victory would be a huge understatement.

On UFC 243 episode of the UFC’s popular The Thrill and the Agony series, we get an up-close look at how those close to Adesanya reacted to his historic victory in Melbourne.

With his victory over Robert Whittaker, Israel Adesanya now has his sights set on undefeated UFC middleweight contender Paulo Costa. The pair jawed at each other after the UFC 243 main event, and are expected to fight in early 2020 — potentially in March in Las Vegas.

While Costa is at the forefront of Adesanya’s focus, the new middleweight champion has also been teasing a fight with Jon Jones. The pair have become heated rivals, and could well fight sometime in the near future.

“I wouldn’t say he’s the ultimate, but he’s definitely a boss on the game I want to play against,” Adesanya told The Mac Life recently of a fight with Jones. “Raider Stadium, Las Vegas, that’s where it’s going to happen. I decided in July when I was in Vegas.

“The middleweight division, it’s getting stacked,” Adesanya added. “I like Cannonier right now, [Paulo] Costa I have to take care of, and a few others, I’m saying 2021 [vs Jones]. I’m fighting. Probably early, yeah. The way I fight, six fights in 18 months, obviously I had a long break. It’s harder when you become champion, so much weight to move fast, yeah, we’ll see what happens.”

What was your reaction when Israel Adesanya defeated Robert Whittaker to win middleweight gold at UFC 243 in Melbourne last weekend?