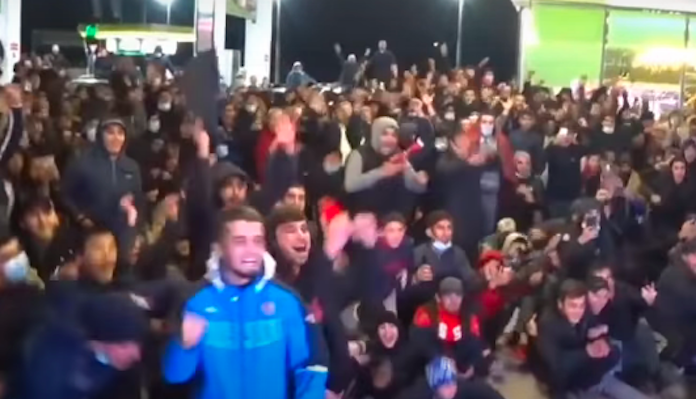 Khabib Nurmagomedov impressed fight fans everywhere when he defeated Justin Gaethje in the main event of UFC 254, but the reaction of fans in his native Dagestan was something special.

Nurmagomedov is a massive superstar in Dagestan and across Russia, and that’s clearer than ever when you watch the footage of fan reactions to his second-round submission win over Gaethje.

While Nurmagomedov caused an explosion of excitement across Dagestan when he submitted Gaethje at UFC 254, he silenced his fans in the moments thereafter when he announced his retirement from mixed martial arts.

In his post-fight interview with UFC commentator Jon Anik, the undefeated Russian explained that he’d promised his mother his fight with Gaethje would be his last, citing the death of his father and mentor Abdulmanap as the reason.

“This was my last fight,” a visibly emotional Nurmagomedov said (h/t DAZN)

“I promised [my mother], it’s going to be my last fight,” Nurmagomedov added. “It was my last fight here. Tuesday, you guys have to put me No. 1 pound-for-pound because I deserve this.

“Today’s my last fight in the UFC.”

Khabib Nurmagomedov hangs up the gloves with a flawless, 29-0 record. It’s one of the best records in MMA history, if not the best outright. Highlights of his flawless record include triumphs over high-level talents in Gleison Tibau, Thiago Tavares, Abel Trujillo, Pat Healy, Rafael dos Anjos, Michael Johnson, Edson Barboza, Al Iaquinta, Conor McGregor, Dustin Poirier, and of course, Gaethje.

Now that Nurmagomedov is retired, the UFC lightweight title is up for grabs. While it’s not clear how the UFC will proceed with crowing a new champion, Conor McGregor, Dustin Poirier, Justin Gaethje, Michael Chandler, Tony Ferguson and Dan Hooker are seemingly all right on the cusp of winning UFC gold. Whoever wins that title, they’ve clearly got some big shoes to fill.