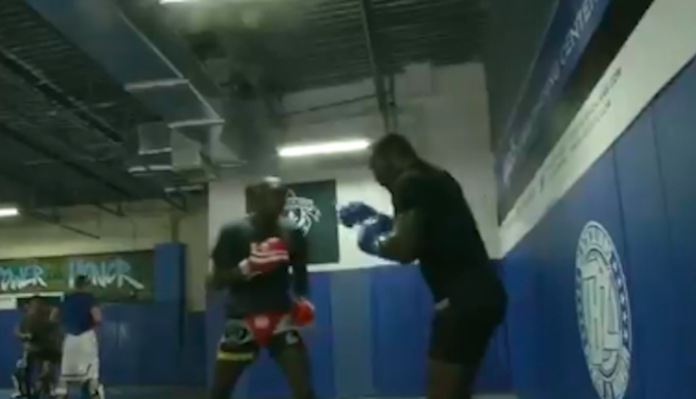 Israel Adesanya, who battles Kelvin Gastelum for the interim middleweight title in the co-main of UFC 236 this weekend, is believed to have some of the best striking in MMA.

The Kiwi kickboxer’s striking is so highly rated that he was actually flown into Florida by renowned coach Henri Hooft in 2015, where he served as a sparring partner for Anthony “Rumble” Johnson. At the time, Johnson was gearing up for a light heavyweight title fight with Jon Jones — a fight that never happened.

As luck would have it, the cameras were rolling when Israel Adesanya and Anthony Johnson strapped on the gloves and got to work.

On Thursday, SportsCenter anchor Phil Murphy shared a snippet of this sparring footage, and it’s a sight to behold. Watch Israel Adesanya do his best Jon Jones impression against Anthony Johnson below:

Israel Adesanya has gone 5-0 since joining the UFC roster, defeating Rob Wilkinson by TKO in his debut, then pummeling Marvin Vettori and Brad Tavares to decision wins, then knocking out middleweight contender Derek Brunson, and most recently scoring a riveting decision victory over the legendary Anderson Silva.

Adesanya enters his UFC 236 showdown with Kelvin Gastelum with a flawless 15-0 record. How do you think he’ll fair in his first UFC title fight? Join the conversation in the comments section below.