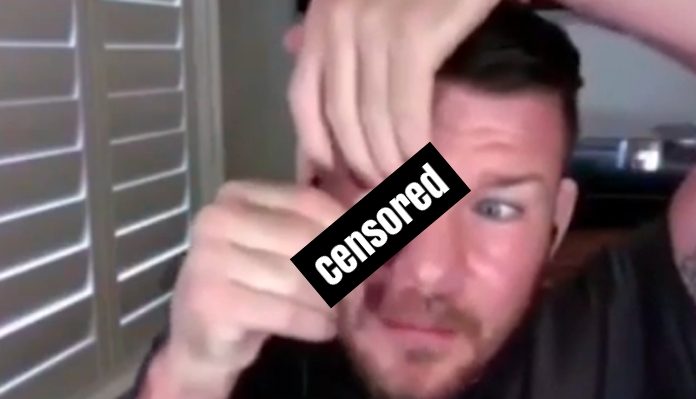 Michael Bisping had an incredible MMA career, culminating with a UFC middleweight title win, but he paid a hefty price for his success.

At the height of his career, he sustained a nasty eye injury, and now wears a prosthetic eye as a result. Bisping flaunted his false eye during a recent episode of his Believe You Me podcast, and it’s not for the faint of heart.

Keep scrolling to see it.

Bisping opened up on the extent of his eye injury in an interview with MMA Junkie this summer.

“My vision (in my right eye) was pretty much non-existent since 2013,” Bisping said. “I was just about able to scrape past the medicals. It was definitely touch and go. I was always terrified of doing a full training camp, then being turned away by the commission doctor.

“It was difficult. To pass the medical test, you’ve got to have 20-200 vision, which is classed as clinically blind anyway, so it’s not very good – it’s not a very hard mark to pass. Some days I could, some days I couldn’t. But fortunately, I was just able to scrape by.

“People always say: ‘How did you fight with only one eye?’ And I always say: ‘With great (expletive) difficulty!’”

Michael Bisping says this injury nearly drove him to retire, but he ultimately decided to stick with it and realized championship level success as a result.

Of course, it wasn’t easy.

“Prior to having the belt, the thought of retiring never entered my mind,” Bisping said. “I look back now, and I think, ‘Wow, what was this guy thinking?’ I see some old fights, and I’m thinking, ‘This idiot’s out there fighting with only one eye, and he’s talking like that,’ so I don’t know where all that came from. But, no regrets.”

Needless to say, Michael Bisping is a tough, tough dude, and his accomplishments are even more impressive considering he effectively only had one eye for a huge portion of his career.