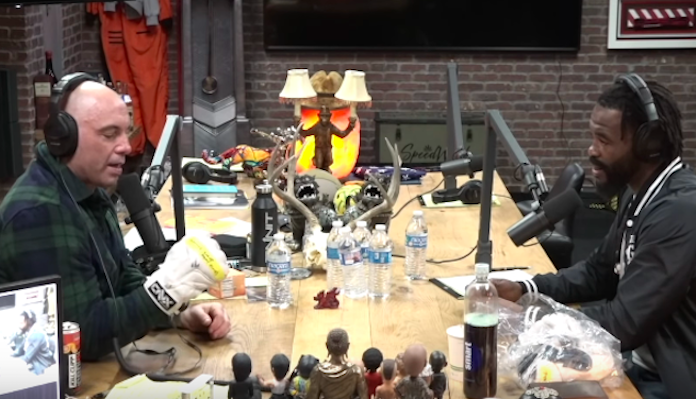 Famed MMA coach Trevor Wittman has developed a new MMA glove with the hopes of reducing the frequency of eye-pokes caused by most other gloves. These new gloves had their official debut on a recent episode of the Joe Rogan Experience podcast.

The gloves were introduced by former UFC light heavyweight champion Rashad Evans, who brought them along for his appearance on the UFC commentator and comedian’s show.

Rogan, who has long called for improvements to the gloves the UFC uses, was an instant fan.

“Has the UFC seen these?” Rogan asked as Evans unpacked the gloves. “They need to make some adjustments, clearly.”

Rogan then tried the gloves on, and became an even bigger fan.

“I like how it’s curved,” the UFC commentator said, noting how the gloves direct the fingers downward rather than straight outward. “It’s curved right away. That’s way better — like the old PRIDE gloves.

“Good padding too,” Rogan said as he tested the glove out against his own hand. “I like them a lot. These are definitely better than the ones the UFC is using right now, I’ll tell you that.”

Evans then chimed in, explaining how the glove also adds new layers of protection for the hand.

“It makes it so that your hand, you don’t get the boxing break,” Evans told Rogan. “It keeps all the muscles, all the ligaments, all the bones in place. So that way when you’re punching, everything is in form.”

From there, Joe Rogan and Rashad Evans discussed other new gloves designed specifically for training, rather than competition. Throughout, the UFC commentator seemed very impressed with what he saw.

While it’s hard to say if the UFC will be willing to introduce these new gloves, Evans confirmed that he and Wittman “are talking with the UFC” about that possibility.

What do you think of these new gloves from Trevor Wittman? Do you share Joe Rogan’s belief that the UFC should be exploring a new glove design?