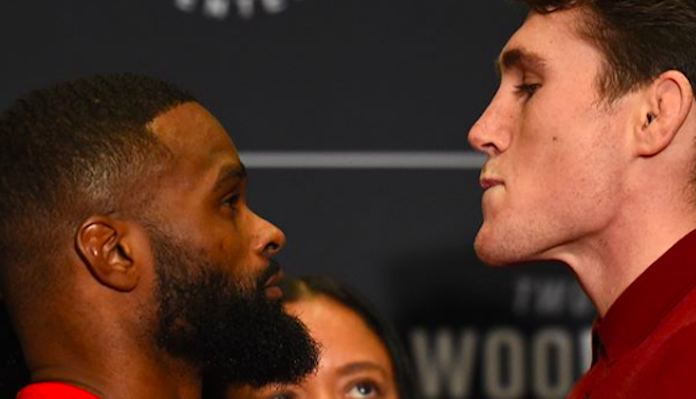 Back in September, English welterweight contender Darren Till stepped into the Octagon with UFC welterweight champion Tyron Woodley. While Till entered this fight as a betting favorite, he was soundly defeated by the champion, succumbing to a submission in the bout’s second round.

In hindsight, Till says he wasn’t in the right headspace heading into this fight with the incredibly dangerous Woodley, who has since lost the title. In fact, he says, he was looking right past Woodley.

Till made this admission during a media scrum ahead of his UFC London showdown with Jorge Masvidal.

“There are little tiny mistakes I can take from that,” he said of the loss. “In the fight — I’ve always been a calm, relaxed fighter— but maybe I was too relaxed, too confident in myself in there. I looked past Woodley and I shouldn’t have. He’s one of the greatest of all time. In the changing rooms I wasn’t really warming up, I was just sort of sitting there waiting to go and take my belt. You should be on edge. I wasn’t on edge. I was just like… [shrugs].”

The good news for Darren Till fans is that he seems to have learned from this mistake. He says he full appreciates the risks associated with his UFC London fight with Jorge Masvidal.

“My hearts pumping right now because I think Jorge is in the room,” he admitted. “It’s a fight. Fighting’s a fearful business. Obviously I’m terrified. Nerves, butterflies, happiness… All them emotions are running through every fighter in this room right now. They might not say it, but I’ll say it.”

Are you surprised by these comments from Darren Till? How do you think he’ll perform against Jorge Masvidal at UFC London?