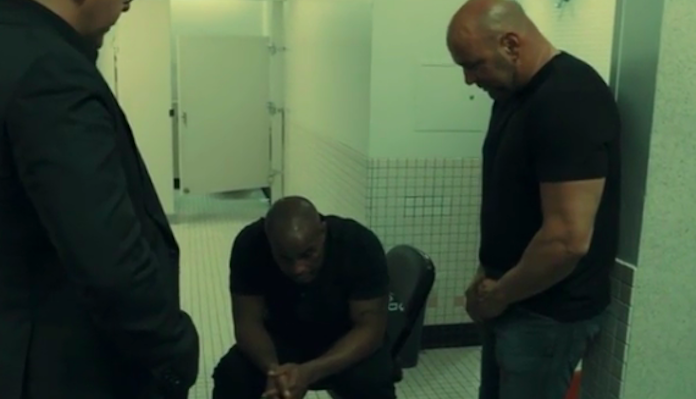 In the aftermath of UFC 241, a video has been released showing UFC president Dana White consoling Daniel Cormier after Cormier’s TKO loss to Stipe Miocic.

Reddit user u/metanoia09 posted the video on r/mma and it’s a tough one to watch.

In the video, White enters the locker room backstage at Honda Centre after the main event of UFC 241 to see a downtrodden Cormier sulking after losing his belt to Miocic. White then attempts to console him.

Cormier then speaks, and he’s incredibly hard on himself.

“Why are you an idiot?” White says. “Listen man, Stipe came to f*cking win. That dude was in great shape, he kept coming forward, you kept coming forward. You don’t see heavyweight fights like that where two fucking monsters just keep coming forward and f*cking blasting each other the way that you were. It was an incredible fight. I know how you are and how competitive you are. You’re the f*cking man, dude.”

After White leaves the locker room, Cormier is seen crying into a towel while his wife and children look on.

“I’m a competitive guy. It’s my gift and my curse,” Cormier says to the camera. “You know like, by not accepting loss it makes you ensure you won’t do it very often. I think that’s what makes me so good at stuff, but also what makes the emotion run so freely whenever it doesn’t go the right way.”

Daniel Cormier concludes by saying that he believes the UFC would grant him a rematch with Miocic if he wants, but he also said he has to sit down and discuss what’s next for him with his family, as he still hasn’t closed the door on his possible retirement from the sport.