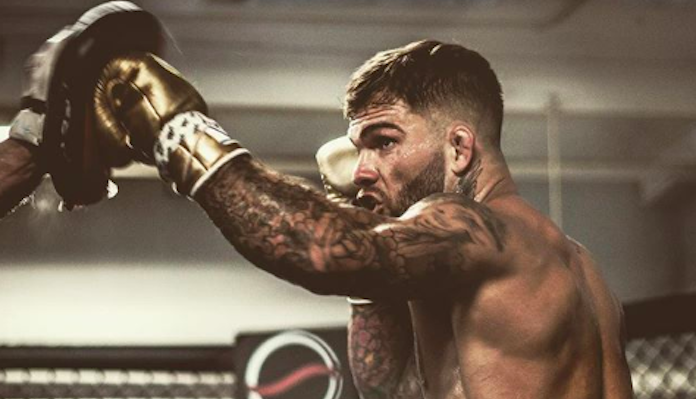 Cody Garbrandt is going to look a little different next time we see him in the Octagon.

In a Sunday post to his official Instagram account, the former UFC bantamweight champion flaunted the beginnings of a new and massive back tattoo. This incredible piece seems to depict a gladiator, and from the looks of it, there’s still lots of work to be done by the talented artist Nic Westfall.

At this stage, its not clear when Cody Garbrandt will have the opportunity to flaunt this new tattoo the Octagon. The former champion was reportedly in consideration to headline the upcoming UFC Sacramento card, but after a trio of knockout losses in his last three bouts, his manager Ali Abdelaziz encouraged him to take some more time off.

“At the end of the day, when you get knocked out like that, I don’t think you should be fighting [without taking some time off],” Abdelaziz told MMA Fighting. “The UFC is doing their job, they’re going to Sacramento, they offered Cody a main event spot — and this is the right thing to do for the UFC, but it’s our job to be like, ‘You know what, guys? We’re going to go back [and take some time].’ Cody’s been having problems with his hand. Especially getting knocked out like that, I think your brain needs a break. And I talked to him, I said, ‘Cody, listen. That’s the deal.’ The kid is a born fighter and I think he’s one of the best bantamweights we’ve ever seen.

“He’s too much of a fighter and I think he needs to get himself right, physically and mentally,” he continued. “And I think we’re going to see a lot of changes coming up, the way he’s going to fight.

“I told him, ‘I will not allow you to fight.’ And Cody respects me enough to listen to me, believe me. [I said,] ‘I’m going to make sure your hand is good, your head is good, and you have 10 weeks of hard training camp, healthy.’”