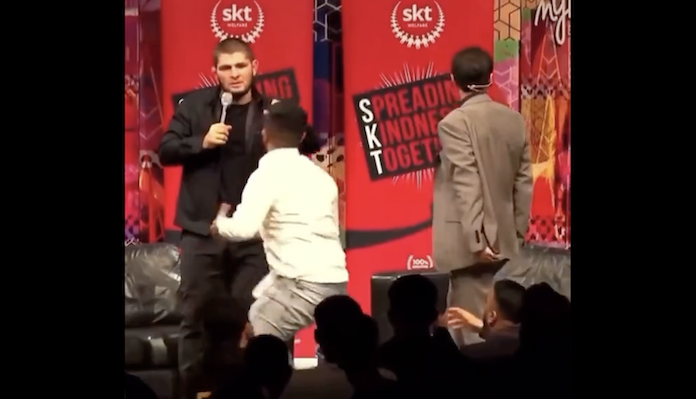 Nurmagomedov is retired from MMA but he has been busy traveling the world and doing speaking engagements. At a recent Q&A session in Harrogate, England, Nurmagomedov was on the stage speaking. As soon as he stood up from his seat, a member of the audience immediately got up and confronted “The Eagle.” However, Nurmagomedov didn’t even flinch, and security immediately removed the fan from invading his personal space.

Nurmagomedov later spoke to the fans and said the following comments (via SportsKeeda) after the fan jumped onto the stage. Check out what “The Eagle” told the fans below.

Let me talk. Guys, I come from other part of world here to see you guys and you know, I think I deserve some respect too. Thank you. Around the world I have big, big support from my people who have same views like I have and I really believe here we have same views and please, take care of your kids. This is our future. This is most important. Thank you guys.

Fortunately, no one was hurt during this incident. In fact, it appeared as though the fan wanted to give Nurmagomedov a hug at one point. However, security tossed him off the stage as he was of course a threat against the former UFC lightweight champion. Nurmagomedov, however, showed that he isn’t scared of anyone in the world as he didn’t even flinch at all during the time when the fan stood up on the stage. It’s just another example of how Nurmagomedov fears no man. No wonder he had so much success in MMA.

What did you think of the non-reaction from Khabib Nurmagomedov when the fan jumped on the stage?