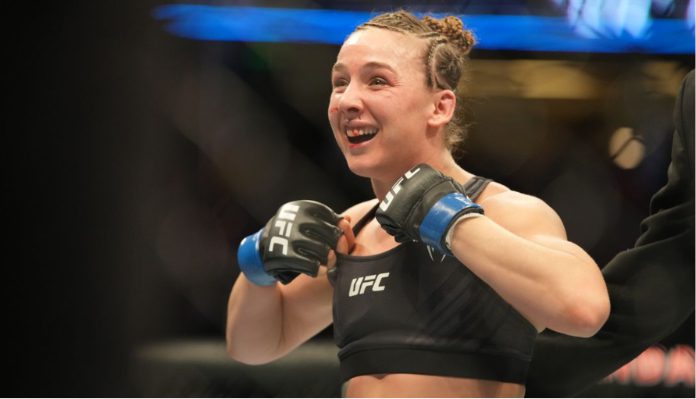 Vanessa Demopoulos is looking to build off her first UFC win.

Demopoulos is coming off a first-round submission win over Silvana Gomez Juarez back in January. Although she didn’t take much damage, she isn’t surprised it took her this long to get her next fight booked.

“No, I’m not. Sometimes the UFC books out a little far, if I wanted to take a super last-minute fight, I could’ve gotten in there sooner,” Demopoulos said on Just Scrap Radio on BJPENN. “But, this was a scheduled bout so that is why it took so long and I’m not mad about it.”

Demopoulos is set to face Jinh Yu Frey at UFC Vegas 57 and ‘Lil Monster’ is excited about the matchup. She knows Frey is a veteran of the game and is a former Invicta FC champion but she believes the size difference could play a role in the fight.

“You have to give a lot of respect to a fellow champion (on the regional scene) in her own right in a division she came from,” Demopoulos explained. “She is from Invicta and did really well over there. She came from the 105lbs division and I’m a pretty big 115’er. She’s a good striker and is a very intelligent fighter.”

Not only does Vanessa Demopoulos think her size could play a role, but so too will her grappling. She knows she has the grapplig advantage but she also plans on showcasing her striking in this one.

Although the goal is to showcase her entire skillset, Demopoulos is confident she will eventually find the finish on the ground.

“That would be ideal,” Demopoulos said. “But, you never know where the fight will play out, every opponent is going to be different so my job is to be well-rounded and be an MMA fighter… I love my grappling, there is a reason why I’m a black belt and go around the world and show off my ju-jitsu skills. Also, I do have a striking background, I started striking before I did jiu-jitsu.”

If Demopoulos gets another stoppage win, she hopes she can start being on cards in front of fans and start working her way into the strawweight ranks.

“I think it would climb me higher, and she is 2-2 in the UFC,” Demopoulos said. “I think this would open the opportunity for me to be on bigger cards or climb higher up the ranks.”

Do you think Vanessa Demopoulos will beat Jinh Yu Frey?