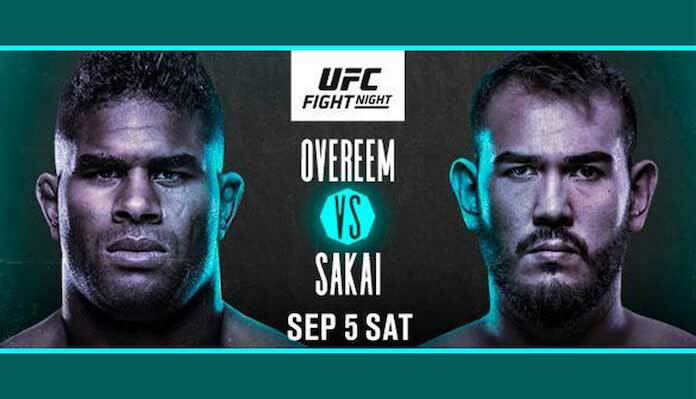 Overeem (46-18 MMA) will enter tonight’s headliner looking to build off the momentum of his recent TKO victory over Walt Harris. The former UFC heavyweight title challenger, ‘The Reem’, has gone 3-1 over his past four Octagon appearances, with his lone loss in that time coming to Jairzinho Rozenstruik.

Meanwhile, Augusto Sakai (15-1-1 MMA) will enter tonight’s UFC Vegas 9 main event with Alistair Overeem on a six-fight winning streak, his latest being a split decision win over Blagoy Ivanov back in May. Since joining the UFC ranks in September of 2018, the Brazilain has gone a perfect 4-0, which includes a sensational knockout victory over Marcin Tybura.

Saint Preux (24-14 MMA) will enter tonight’s contest looking to rebound, this after suffering a split decision loss to Ben Rothwell in his most recent outing. Prior to his setback to ‘Big Ben’, ‘OSP’ was coming off a submission victory over Michal Oleksiejczuk while utilizing his infamous Von Flue choke.

Meanwhile, Alonzo Menifield (9-1 MMA) will enter tonight’s UFC Vegas 9: ‘Overeem vs. Sakai’ event looking to rebound from the first loss of his professional career which he suffered to Devin Clark at UFC 250. Prior to his first career setback, Menifield was coming off a sensational first round knockout victory over Paul Craig.

Get all of tonight’s UFC live results and highlights below:

Alistair Overeem vs. Augusto Sakai – Overeem def. Sakai via TKO (hellbows) in Round 5

Zelim Imadaev vs. Michel Pereira – Pereira def. Imadaev via submission (rear-naked choke) at 4:39 of Round 3

Brian Kelleher vs. Ray Rodriguez – Kelleher def. Rodriguez via submission (guillotine choke) at 0:39 of Round 1

WATCH YOUR NECK! 😳@BrianBoom135 only needs SECONDS to end it!

Bartosz Fabinski vs. Andre Muniz – Muniz def. Fabinski via submission (armbar) at 2:42 of Round 1

Who are you picking to win tonight’s UFC Vegas 9 main event between heavyweight standouts Alistair Overeem and Augusto Sakai? Share your predictions in the comments section PENN Nation!