The main event proved to be a thrilling five round war. Marvin Vettori was able to get off the better volume throughout the twenty-five minute affair, but Paulo Costa landed some big shots and made a huge push in the final five minutes. After five rounds of heart-pounding action Vettori was awarded a much-deserved unanimous decision victory from the judges in attendance.

In the co-main event of UFC Vegas 41, lightweight fighters Grant Dawson and Rick Glenn squared off in hopes of moving up the promotional rankings. The bout resulted in a wild back and forth affair. Grant Dawson was able to get the better of Rick Glenn for the majority of the opening ten minutes, but the veteran stormed back in round three with a huge round of his own. After fifteen minutes of action that bout was ruled a majority draw. 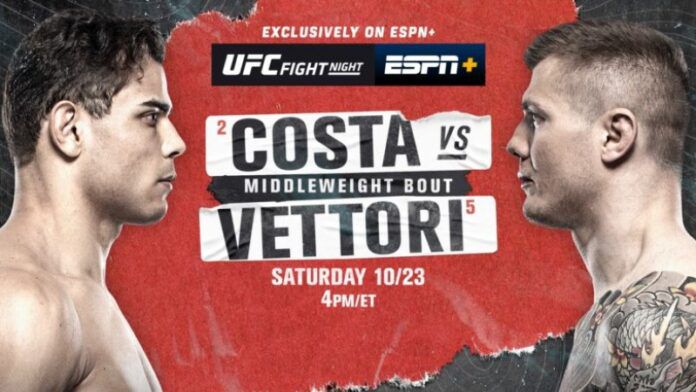 Fight of the night: Jun Yong Park and Gregory Rodrigues each pocketed an extra $50k for their thrilling war in tonight’s UFC Vegas 41 featured prelim. Rodrigues ended up defeating Park via TKO.

Performance of the night:  Alex Caceres earned an extra $50k for his come from behind submission victory over Seungwoo Choi.

Performance of the night: Marvin Vettori pocketed an extra $50k for his thrilling unanimous decision victory over Paulo Costa in tonight’s main event.

Are you surprised by any of the performance bonuses handed out by Dana White and company following the conclusion of today’s UFC Vegas 41 event? Share your thoughts in the comment section PENN Nation!