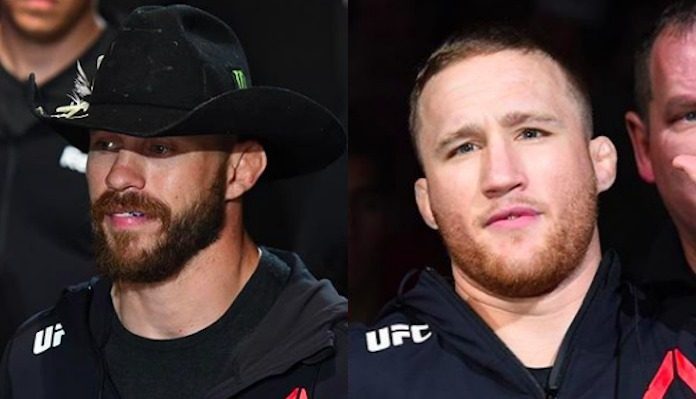 Donald Cerrone will be returning to the Octagon for the first time since June’s UFC 238 event in Chicago, where he suffered a second-round TKO loss to Tony Ferguson.

Prior to the setback, ‘Cowboy’ had strung together three straight victories which included stoppage wins over Alexander Hernandez and Mike Perry.

Meanwhile, Justin Gaethe (20-2 MMA) will enter tonight’s headliner on a two-fight win streak, his latest being a first round knockout victory over Edson Barboza.

In the co-main event of UFC Vancouver, perennial light heavyweight contenders Glover Teixeira and Nikita Krylov will collide in hopes of moving up the 205-pound ladder.

The former title challenger, Teixeira (29-7 MMA), was most recently seen in action at April’s UFC event in Sunrise, where he defeated Ion Cutelaba by way of submission. That victory extended Glover’s current win streak to two in a row, as he had previously defeated Karl Roberson this past January.

Meanwhile, Nikita Krylov (25-6 MMA) will be returning to the Octagon for the first time since April’s UFC 236 event, where he scored a second round submission victory over Ovince Saint Preux. The Russian standout has gone 5-1 over his past six contests.

Get all of this evenings UFC Vancouver Live Results and Highlights below:

Donald Cerrone vs. Justin Gaethje a Gaethje def. Cerrone by TKO in Round One
Nikita Krylov vs. Glover Teixeira – Teixeira def. Krylov by split decision (29-28, 28-29, 29-28)
Todd Duffee vs. Jeff Hughes – Fight ends in a no-contest due to an accidental eye poke
Michel Pereira vs. Tristan Connelly – Connelly def. Pereira by unanimous decision (29-28, 29-27 x2)

Smashing his way to the finish!

Augusto Sakai vs. Marcin Tybura – Sakai def. Tybura by KO at 0:59 of Round One

Who are you picking to win tonight’s UFC Vancouver headliner between Justin Gaethje and Donald Cerrone? Sound off in the comments section PENN Nation!