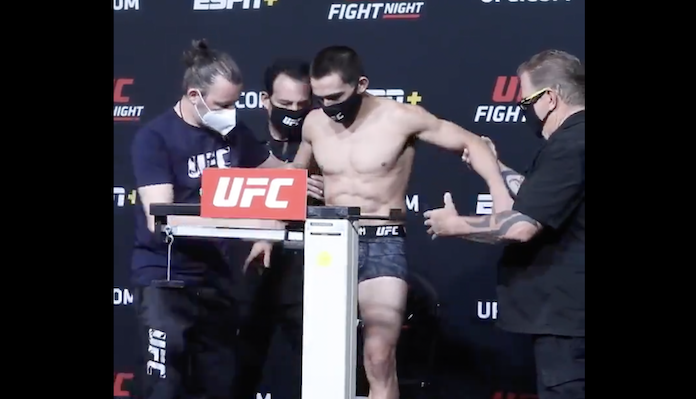 The UFC continued to trim its roster this weekend as four more fighters have parted ways with the worlds leading mixed martial arts organization.

The latest roster moves are not necessarily considered “releases”, but the promotion opted against renewing the contracts of the following fighters.

The Hawaiian fan favorite went in 6-8 during his eight years with the UFC. However, after a four-fight losing skid he was let go by Dana White and company.

“FOREVER HUMBLED- because I know I could have less. ALWAYS GRATEFUL-because I know I’ve had less… #ym #nextchaptersamestory” – Yancy said of his release.

‘Baby Face’ went 3-6 while fighting under the UFC banner but after suffering three straight defeats was handed his walking papers (via MMAJunkie).

Jaynes made his UFC debut in stunning fashion earning a first-round TKO victory over Frank Camacho in June of 2020. Unfortunately for ‘Guitar Hero’, he went on to lose his next four fights and was ultimately let go by the Ultimate Fighting Championship.

Rivera went 0-4 during his UFC run and as expected did not have his contract renewed by the promotion.

What do you think of the latest roster trimming done by Dana White and company? Share your thoughts in the comment section PENN Nation!