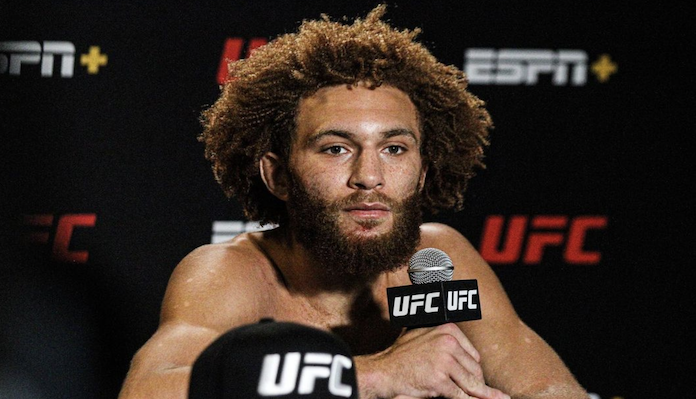 UFC lightweight fighter Luis Pena has been accused of punching his girlfriend and breaking her iPhone 11 during a domestic violence incident.

According to MMAFighting.com, Pena is accused of the domestic violence incident that allegedly took place on June 14. Police documents revealed that Pena’s girlfriend of one year called the police and said that “Violent Bob Ross” had gotten angry after accusing her of looking at other men’s photos on Instagram and decided to destroy her iPhone 11. According to the woman, whose name has not been made public, Pena also left her face with marks and bruises. She reportedly also had a lump on the top of her head as well.

Police in Boca Raton, Florida, then received an anonymous tip that Pena was allegedly feeling suicidal and had a gun and was traveling back to his girlfriend’s house later that day to kill her. At that point, Pena and police got into contact and he was eventually taken into custody. He is still awaiting transport to Palm Beach Country from the Broward County Detention Center.

Pena has been charged with three crimes for the alleged incident, including robbery by sudden snatching, battery, and criminal mischief. UFC executive Hunter Campbell provided a response to ESPN when asked about Pena’s issue with the legal system, with the promotion acknowledging they are aware of the incident and are keeping the situation monitored. The UFC also pointed out Pena has been suffering from mental health issues and substance abuse issues, which he has talked about publicly on his social media.

Pena’s lawyer Daniel Martinez also provided a comment, suggesting the accusation was baseless because there was no one else there to say the story was what actually happened.

“An accusation is not worth the piece of paper it’s printed. Nobody was there. There’s no evidence. It’s just person A’s rendition versus person B’s. Accusations are accusations. Evidence is evidence,” Martinez said of his client Luis Pena.