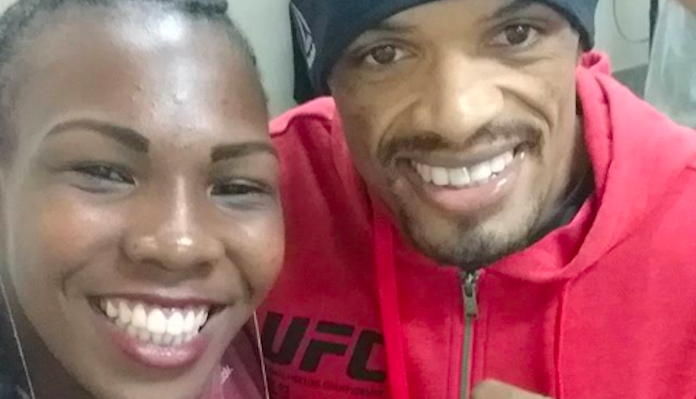 UFC bantamweight Duda Santana has been forced to rely on the kindness of her UFC roster-mates to survive the coronavirus pandemic.

Santana, who lives with her mother, six siblings, and daughter in the Cidade de Deus (City of God) favela in Rio de Janeiro, recently told Brazilian publication Combate that she has been struggling to keep food on the table during the pandemic, as neither she nor her family members have been able to work.

“Every day is a struggle,” Santana said (via Google Translate). “I don’t even know how to answer that question [about how to make a living]. I’m not working, neither is my mother. There are days when we wake up with nothing and God provides. In Holy Week we had nothing to eat—neither egg nor fish. But God provided, a friend of the family brought the fish. It’s one day at a time. The situation is complicated. It has been a long time since I fough, the money has run out.”

After Combate’s interview with Santana surfaced, UFC lightweight Alan Patrick posted in a group chat containing some 80 UFC fighters, imploring his fellow athletes to pitch in and help her. Speaking to MMA Fighting, Patrick revealed the UFC light heavyweight contender Glover Teixeira was the first to donate to Santana’s cause. Amanda Ribas, Anderson dos Santos and Raphael Pessoa also opened their wallets.

“I helped ‘Cowboyzinha’ [Santana] because I’ve been in her situation before,” Patrick told MMA Fighting. “I know how it feels to be hungry, to share a house with several siblings and not have anything to eat. We know ‘Cowboyzinha’ and her family are victims of the system. The system doesn’t let you acquire knowledge and grow as a person.

“Thank God and thank to sports she was able to achieve something and get to the world’s biggest promotion, but everybody in Brazil thinks like, ‘boom, your problems are over’ if you’re signed by the UFC.”

As Patrick suggests, a UFC contract is not an automatic ticket to wealth and success, as some people might expect. The UFC lightweight went on to slam the UFC for allowing Santana to live in such poverty.

“It’s embarrassing not for me, but for the organization in Brazil,” Patrick said. “They could have thought, ‘no, let me do this.’ I started the campaign and talked to other UFC fighters. ‘Are we going to see this story and not do nothing while our friend starves?’ Doing for someone what others have done for me in the past is priceless.”

Speaking to MMA Fighting, Santana announced that she received a donation from her fellow fighters last week, and that she was “happy, emotional and thankful.” She used the money to buy food for her family.

“We’re broke like everyone else,” Santana said. “It’s complicated. I depend on the fight and the win, and I was counting on the money. We work hard and train hard every day to fight, so it’s a bit frustrating. That’s the word, we get frustrated.”

From here, Duda Santana is working on receiving funding from the Brazilian government.