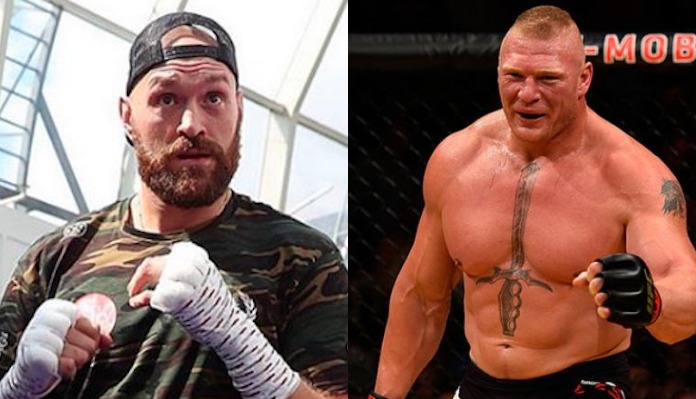 Tyson Fury is the current lineal heavyweight champion in the world of boxing, yet he is looking at competing in MMA.

Fury has been training with Darren Till and has called out Stipe Miocic and Francis Ngannou. Now, he has shifted his attention to former UFC heavyweight champion and current WWE superstar, Brock Lesnar. He believes that fight would pay well and a scrap he would win rather easily.

“Yeah, I fancy the fight with Brock for sure. Yeah, I watched a few of his fights for sure,” Fury said on the True Geordie podcast. “[He is] pretty handy, but I could flatten him in a WWE match or in a proper fight I could flatten Brock Lesnar in 30 seconds.”

Brock Lesnar has not fought in MMA since UFC 200 when he beat Mark Hunt by decision. Yet, the bout was overturned to a no-contest after he failed a drug test. That scrap marked his return to the Octagon since he lost back-to-back fights to Cain Velasquez and Alistair Overeem in October 2010 and December 2011.

In his MMA career, he has notable wins over Randy Couture, Frank Mir, and Shane Carwin. He is currently 5-3 and one no-contest as a pro. He was also rumored to return to fight Daniel Cormier this year, but, he decided to stay retired and continue on in WWE.

Tyson Fury, meanwhile, is rumored to be rematching Deontay Wilder in February. He says once his boxing contract is over he will pursue MMA, but UFC president, Dana White said he isn’t interested as he believes the Englishman would get smashed.

Whether or not Brock Lesnar would return to MMA to fight Tyson Fury is to be seen. It seems highly unlikely the bout would be in boxing. So, a scrap in the UFC makes the most sense for it.

Do you agree with Tyson Fury that he would flatten Brock Lesnar in 30 seconds in a fight? Sound off in the comment section, PENN Nation!