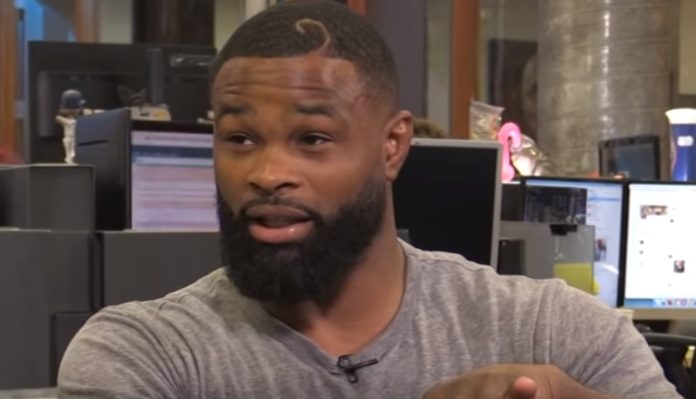 Tyron Woodley has revealed why he is no longer interested in fighting Leon Edwards next.

The former welterweight champion was scheduled to fight Leon Edwards this week in the main event of UFC London. Due to the looming threat of Coronavirus, this London card fell apart. Colby Covington offered to fill in against Woodley at the last minute on a relocated card on US soil, but Dana White was forced to cancel the event altogether.

Now, “The Chosen One” has explained why he has no plan on rearranging a fight with Edwards.

“The only reason that the Leon Edwards fight ever got booked, is because Colby Covington wasn’t ready to fight,” Woodley said to Ariel Helwani. “And they didn’t know when Colby would be ready to fight, and I didn’t want to wait.”

Leon “Rocky” Edwards is currently ranked number 4 in the 170-pound division, and he has the longest active win streak behind the champion, Kamaru Usman. Tyron Woodley acknowledged that Edwards is a good fighter, but due to lack of popularity for the Brit, he has no interest in fighting him.

“Cause I originally said I wasn’t going to f*cking London to fight,” Woodley said. “Why? ‘Cause [who the] f*ck’s Leon Edwards? Nobody knows his a*s. [But] He’s a good fighter, he’s a great fighter. I gave him props every time.”

Woodley went on to criticize the behaviour of other fighters who engage in trash-talking and dress a certain way in order to promote themselves.

“But look how corny everybody is. Like Gilbert Burns was just in the elevator, saying what’s up to me. [He was] out of the country, now he’s on the bottom [saying] ‘let’s go blah blah.’ You’re supposed to do that because that’s the model that everybody has portrayed that that’s how you get a fight. That’s how you sell a fight. This is what you have to do.

“What you guys don’t realise is you look f*cking dumb, you look stupid. You’re doing what other people want you to do. I do what I want to do.”

Colby Covington’s popularity surged in 2019 due to his polarizing behaviour, trash-talking, and subsequent title fight against Kamaru Usman. Despite wanting to fight him, Tyron Woodley mocked the welterweight for creating an “act.”

“Our sport’s seen Chael Sonnen first, then they’ve seen Conor McGregor, then Colby Covington created this whole act,” Woodley said. “If you’re going to create an act, don’t tell people it’s an act. Hold on to it until you retire. Like you’re openly telling people it’s an act, makes it even cornier.

“So you’ve got everybody dressing the way they think they’re supposed to dress… Conor McGregor was wearing suits, let me wear a suit. This guy was talking trash, let me talk trash. This guy has a gimmick, let me get a gimmick.

“It’s so terrible that grown a*s men and women can’t just be themselves these days.”

In some ways, it could be perceived that Tyron Woodley contradicted himself by refusing to fight Leon Edwards for not being “known,” but calling out fighters for making an effort to increase their popularity. What do you think? Let us know in the comments below.