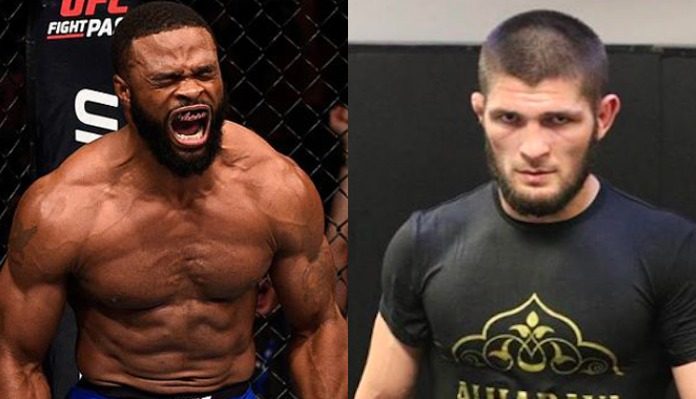 Tyron Woodley has his eyes set on reclaiming his welterweight title, but he also wants another fight. “The Chosen One” would like to fight the undefeated UFC lightweight champion, Khabib Nurmagomedov.

Although making 155 pounds is out of the question for Woodley, he is open to fighting Nurmagomedov at a catchweight. He just wants the fight, and to show off his takedown defense. It is also a fight he thinks he can win.

“I want to fight Khabib,” he said on TMZ Sports. “I got the best takedown defense in the history of the sport. He’s dope, man. There’s not too many guys around like that. He’s a once in a lifetime. I’m a fan of his.“

Before the fight can happen however, Woodley believes he needs to reclaim the welterweight title to make the bout enticing for Nurmagomedov.

“You know the good thing about it is he got one or two more fights in that division that make sense for him,” Woodley said. “He struggles to make 155. I got to get my belt back for this fight to make sense. He won’t even have to come up. We can do it at a catchweight, 165. I barely can make it but for the right bag…”

Tyron Woodley wants to improve his legacy and wants to be the one to hand the Russian his first loss. Yet, he isn’t sure if Khabib Nurmagomedov would even be interested in a fight with him.

“He’s a beast,” Woodley said at a fan Q&A before UFC Vancouver (h/t MMA Fighting). “I just think that right now in my life and my career, I need the impossible. I need the stuff that nobody can do, I need the thing that’s gonna motivate me beyond measure and I think that he provides that.

“Obviously, I could never make 155. I’m already kind of alluding to handling business at welterweight and going up to middleweight. It would have to be something at a catchweight, it would have to be something that he would be interested in. He’s on top of the world right now, I might not even be an option for him. It’s more out of respect of what he can do. I know Dustin, he spars middleweights, light heavyweights, and for him to go out there and put on a performance like that against Dustin, I gotta see what it feels like.”

Who do you think would win a fight between Tyron Woodley and Khabib Nurmagomedov if they were to fight?