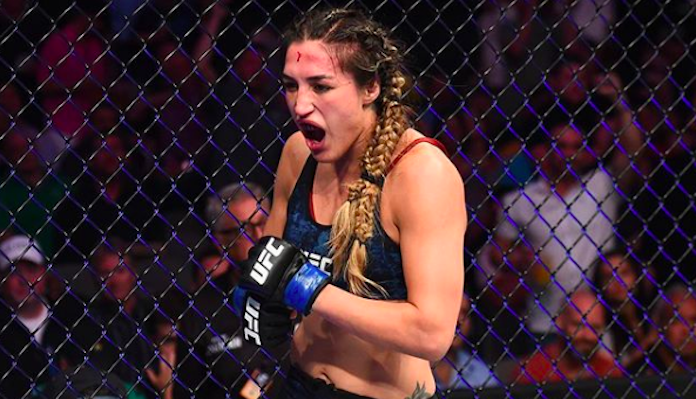 Just this past week, it was reported that UFC 238 was being looked at as the hosting spot for the third UFC flyweight title bout in the promotion’s history. Well, as of Monday that has indeed been confirmed as the case.

The UFC made the bout official as the Valentina “Bullet” Shevchenko (17-3) looks to make her first successful title defense against the ever resurgent Jessica “Evil” Eye (14-6) who is unbeaten at 125-pounds.

But that’s not all that’s now on tap for the UFC’s return to the Windy City!

Along with the flyweight title fight being made official, another big bout within the division has been confirmed by the Chicago Tribune as the No. 3 ranked contender Katlyn Chookagian (11-2) will square off with the No. 7 ranked Joanne Calderwood (13-3).

For Chookagian, she will be looking to rebound off of her lone career loss at flyweight which came at the hands of the aforementioned Eye in a razor-thin split decision at UFC 231 in December 2018.

Calderwood, on the other hand, hopes to keep her great momentum rolling since moving to Syndicate MMA in Las Vegas and joining the division as she currently rides a very impressive two-fight winning streak. A win could very well launch her right into the next contender spot.

And last but not least, also confirmed by the Chicago Tribune, is the pivotal strawweight contender match-up between the No. 3 ranked contenders in Nina Ansaroff (10-5) and the dominant Tatiana Suarez (7-0).

Despite a rough start to her UFC career with two questionable decision losses, Ansaroff has turned a new leaf by going on a fantastic four-fight winning streak with her most recent win coming over former title challenger Claudia Gadelha.

Meanwhile, Suarez has been chomping at the bit to get back in the Octagon against whoever will accept to fight her.

UFC 238 is definitely off to a good start with its first three bouts.