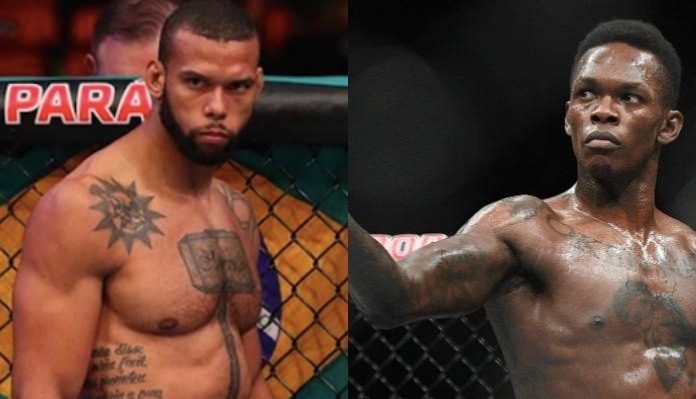 UFC light heavyweight champion Jon Jones has recently traded quite a bit of trash talk with interim middleweight champion Israel Adesanya, but he’s not sure he’d be willing to fight him. Jones’ next opponent Thiago Santos, however, would relish the chance to fight Adesanya, even if it meant dropping back down to the middleweight division.

In fact, Thiago Santos says he has had a few encounters with Israel Adesanya in the past, and they haven’t been particularly pleasant.

If Thiago Santos were to meet Israel Adesanya in the cage, he’s confident he’d be able to defeat him. That being said, this is not a fight he’s thinking about for the moment. His focus is glued exclusively to the massive test ahead in Jon Jones.

“As a fighter? He’s talented, he has a gift,” Santos said of Adesanya. “I can’t say a thing about that. But I don’t think he can take it against me. He can’t handle someone who hits him hard, who doesn’t fall for his games. His fight with Anderson [Silva], you can see he’s not that big of a deal.

Does a future fight between Thiago Santos and Israel Adesanya interest you? Who do you think would win?