Carla Esparza was given a harsh reception from the New York crowd at the UFC 281 pre-fight presser.

Boos rang out in the Big Apple a the 115lb champ talked about having ‘unfinished business’ heading into her co-main event clash with Zhang Weili. The American became the inaugural UFC women’s strawweight champion when she beat Rose Namajunas to win the belt in 2014. But she failed to defend it after getting knocked out by Joanna Jędrzejczyk in her first title defence.

Esparza says she’s relishing the chance to successfully defend this time against Zhang.

“It means everything to me. I fought back tooth and nail for eight years to get back here so that I could defend this belt,” said explained, before adding amind a chorus of boos, “that is the unfinished business that I have left to do and i’m excited to get the opportunity to do that.”

Esparza likely drew the ire from MMA fans for the manner in which she won the title from Namajunas at UFC 274. ‘The Cookie Monster’ took the split decision in a bout that saw very little action between the two fighters. According to MMA By The Numbers, Esparza only landed 30 strikes. Both women landed a total of just 68. This is the least amount ever-landed in a five round affair in UFC history. It seems the fans are taking their time to forgive Esparza for the performance. Every time she spoke at the UFC 281 presser, her words were met with distain from the crowd.

The 35-year-old even tried to appeal to their sense of patriotism by declaring, “I’ll do everything in my power to keep this belt here in the US.” Her words, however, were met with the same hostile reaction.

Esparza will have an opportunity to win the crowd over when she takes to the Octagon, but she faces a stiff test against the former champion – who rediscovered her best form by knocking out Jędrzejczyk at UFC 275. Leading up to this fight, Zhang Weili says she wants to test her wrestling against Esparza.

The Chinese star  previously spent time training with Henry Cejudo at Fight Ready. She might well empathise with Esparza, having experienced her owns spates of crowd hostility in the passed – something ‘Triple C’ acknowledged and sought to prepare her for. 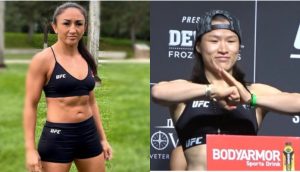 For this camp, the 33-year-old has trained with George Hickman at Bangtao Muay Thai & MMA in Thailand. The Hickman brothers are renowned for their excellence in MMA wrestling and it will be interesting to see how Zhang matches up with Esparza’s grappling prowess.

Will Esparza hush to the boo-boys come the weekend or will Zhang reclaim the title?

This article appeared first on BJPENN.COM
Previous articleMatt Frevola plans to drag Ottman Azaitar into deep waters to finish him at UFC 281 after 2021 fight cancellation: “I owe that dude an ass beating”
Next articleDaniel Cormier reveals he’s changed his tune regarding Jon Jones fighting at heavyweight: “My opinion of him has changed in this regard”
© Newspaper WordPress Theme by TagDiv