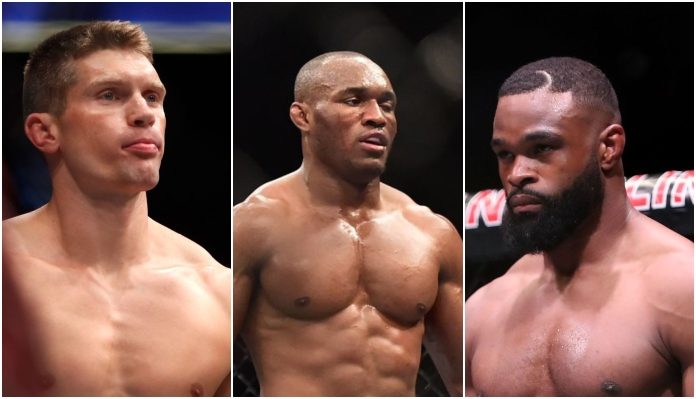 When it comes to elite level strikers in MMA, a discussion can’t be had without mentioning the likes of welterweight’s ‘Wonderboy’ Stephen Thompson.

A two-time title challenger, unfortunately for Thompson, he has yet to come out as a victor in his title opportunities.

Set to return as the headliner of UFC Nashville on March 23, Thompson will welcome the former WEC and UFC lightweight champion Anthony ‘Showtime’ Pettis to the ranks of the 170-pounders.

Earlier in the month of March, we’ll be treated to the welterweight division’s next title bout which pits champion Tyron Woodley vs Kamaru Usman.

Thompson is obviously a very interested party and one who is very familiar with the champion in Woodley whom he’s fought 10 rounds against.

Because of his 0-1-1 record vs the current champion, Wonderboy hopes a new champion is crowned at UFC 235.

“Yeah, most definitely,” Thompson said on Ariel Helwani’s MMA Show. “For my career-wise, I would want Kamaru Usman to win. But man, Tyron is just another animal. He’s another animal. His wrestling… Is very good. I think better than any of the guys that Usman has faced. I believe that Tyron’s striking is, he’s very explosive. They’re both gonna have their hands full.

“But for my career, yeah I would definitely want Usman to win.”

Although Thompson is tasked with a fellow striker in his next matchup with Pettis, he acknowledges that the top of his division is flooded with top-tier wrestlers. Noting the addition of Ben Askren, Thompson is excited about the continued challenges that may be waiting for him.

“The top 10 – top 5 is just screaming with wrestlers,” Thompson said. “Which is exciting for me because I gotta stay on my game, I gotta keep evolving, keep getting better at that.”