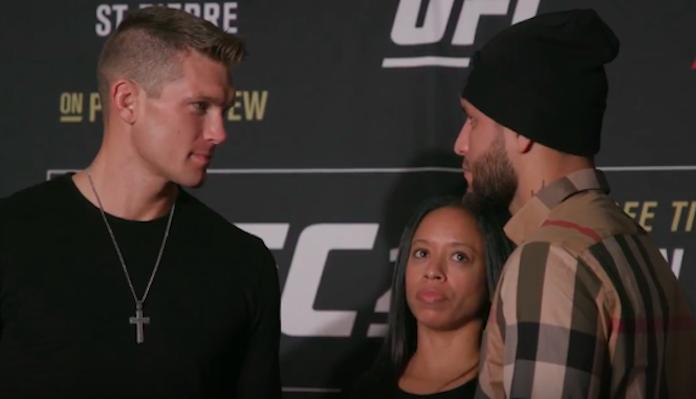 Jorge Masvidal has spoken a great deal about his new focus on being more aggressive and finishing his fights. His former opponent Stephen Thompson has witnessed that transformation.

Thompson defeated Masvidal by decision in late 2017, and after watching Masvidal bludgeon Nate Diaz to stoppage win in the UFC 244 main event, is convinced the Cuban has completely changed since their fight.

“He looked better than ever, man, for sure,” Thompson said at the UFC 244 post-fight press conference, shortly after he defeated Vicente Luque on the main card (via MMA Junkie). “(He’s) definitely a different fighter from when I fought him last. His striking looked good. Very unpredictable. That head kick in the first round was sick. I’ve got to give him props for that because I love to kick people in the head, as well. But I thought it was great. I mean Nate Diaz, he didn’t have an answer. He tried to come back with some stuff, but I can just tell: Masvidal crushed him. After that first round, he didn’t want any more. I’m pretty sure he wanted out of there, but hat’s off to Masvidal. (He) definitely deserved it, and like I was telling everybody before, that’s my inspiration, bro.”

Despite the fact that he holds a win over Masvidal, Thompson has stated he’d love to fight his former foe again. He’d also welcome a fight with Masvidal’s latest casualty, Nate Diaz.

Does a future rematch between Stephen Thompson and Jorge Masvidal interest you?