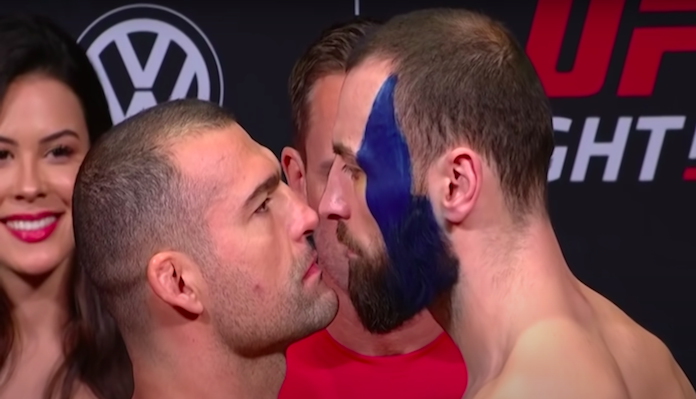 A rematch between light heavyweights Shogun Rua and Paul Craig has been booked to take place at this November’s UFC 255 event.

ESPN’s Ariel Helwani was the first to report the news the UFC is targeting the rematch between Shogun and Craig for UFC 255, which takes place on November 21 at a location that is still to be determined. The card is expected to be headlined by UFC flyweight champion Deiveson Figueiredo vs. Cody Garbrandt, with a co-main event between UFC women’s’ flyweight champion Valentina Shevchenko and Jennifer Maia.

Shogun and Craig previously met at UFC on ESPN+ 22 in November 2019, and the two fought to a rare split draw, with the judges scoring the bout 29-28 Shogun, 29-28 Craig, and 28-28 for a split draw. Many were calling for the rematch following the first fight, but the UFC instead chose to have Shogun fight Antonio Rogerio Nogueira in a trilogy fight on Fight Island, where he won a decision. Craig ended up fighting Gadzhimurad Antigulov on in Abu Dhabi, where he won the fight by first-round submission.

After their recent appearances on Fight Island, Shogun requested a rematch with Craig and the UFC has blessed him with his wish.

Shogun (27-11-1) is the No. 14 ranked light heavyweight in the UFC. He is currently on a three-fight unbeaten streak with the win over Little Nog in his last fight, the draw against Craig, and a TKO win over Tyson Pedro. Despite being 38 years old now, Shogun is 5-1-1 over his last seven fights, showing that the old horse still has a little bit left to give.

Craig (13-4-1) is also unbeaten over his last three fights with the draw to Shogun, the win over Antigulov, and a submission win over Vinicius Moreira. Craig, the No. 15 ranked light heavyweight in the UFC, has been inconsistent in the Octagon with a 5-4-1 record. But when he’s on he’s on, and he’s finished all five of his UFC wins by submission.

Who do you think wins the rematch, Shogun Rua or Paul Craig?