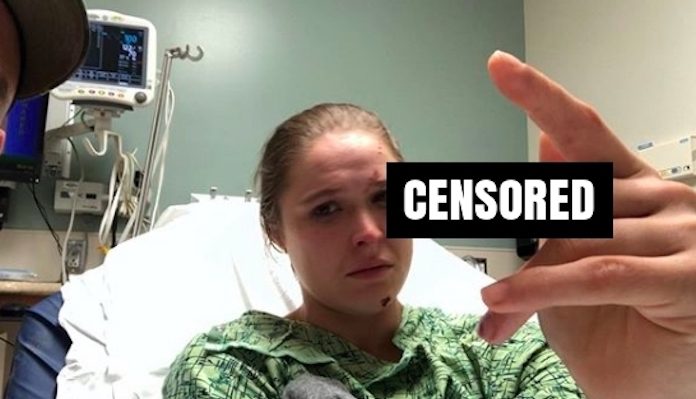 Former UFC bantamweight champ Ronda Rousey very nearly lost her finger on a television set this week. Luckily, she was able to get to the hospital and get this digit repaired before any lasting damage occurred.

Speaking her official YouTube channel, Rousey opened up on this harrowing incident.

“First take of the day, all I had to do was pretty much open up the boat door and step up and have lines and all this stuff and whatever,” Rousey said (via MMA Junkie). “I guess I was just a little bit too short to push the boat door all the way to the top, so I had to give it a little bit of an ‘oomph’ like a push, and it stalled at the top and came down, or it bounced back and came down, but it was staying up enough for me to turn my back on it and stepped out and the boat door slammed down.”

This injury looked absurdly painful. Luckily, Ronda Rousey is fairly accustomed to pain, which allowed her to keep her cool and even finish the scene she as working on.

“I thought I just jammed my nail, you know like if you jam their fingers in doors and lose their nails? I went like ‘ouch, (expletive) and then don’t be a (expletive), just finish the scene.’ So I finished the scene and I had all these lines and stuff and I was throwing things off of the boat. And then I looked down and I was like ‘ohhhh.’

“I had to tell the director, I remember, like, turning towards him and I remember telling them ‘you guys are not going to like, this, but my finger is no longer attached to my finger.’ And they were like ‘what?’ and I looked down and my finger was barely hanging on.”

Given the way she handled this gruesome injury, Ronda Rousey suspects some of her peers on the set — who she rejoined as soon as she was able — think she’s a “psychopath.”

“Everybody on the set, I’m pretty sure they think I’m a psychopath for finishing the scene and not saying anything,” Rousey said. “But it’s just having so many things ingrained and you, like I don’t acknowledge pain until I have the time and I can really hide it. So I’m pretty sure everyone thinks I’m nuts. They found out that I’m nuts. But it’s really cool, they figured out a way to  work around and still fit me into the story, but I was actually really bummed, I had a lot of really cool stunts I was going to do that got cut because of my condition.”