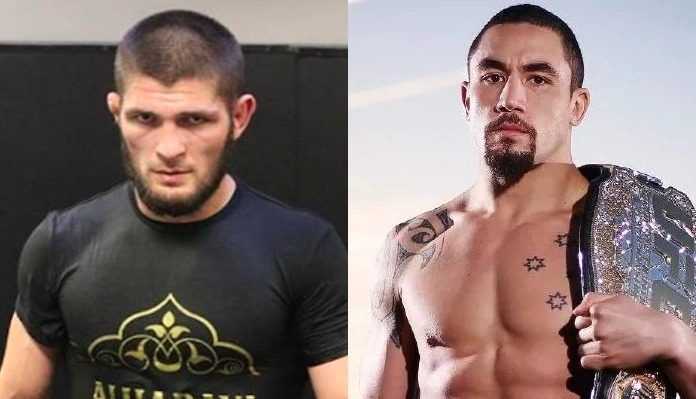 Count Robert Whittaker among those who are very impressed with the undefeated Dagestani lightweight champion Khabib Nurmagomedov.

Whittaker says what he has seen of Nurmagomedov has been “phenomenal.” He doesn’t expect anyone will stop the lightweight champ any time soon.

“What I like about him more than anything is, for one, he’s a straight character, I really admire and respect that. And two, everybody knows what he’s going to do — every single person — and no one can stop him. I think that’s phenomenal.”

Nurmagomedov has been dominant in his career and has only lost one round in his UFC career — the third round of his fight with McGregor. He also has notable wins over Rafael dos Anjos, Edson Barboza, and Michael Johnson, among others.

The lightweight champ’s next opponent should be Tony Ferguson, which many think will be Nurmagomedov’s toughest fight to date. But, if Robert Whittaker is right, Nurmagomedov should be able to win that fight and defend his title once again.

Robert Whittaker, meanwhile, is set to fight Israel Adesanya on Oct. 5 in Melbourne, Australia for the middleweight title. It will be the first time the Aussie fights since UFC 225 in June of 2018.

What do you make of Robert Whittaker’s comments about Khabib Nurmagomedov?