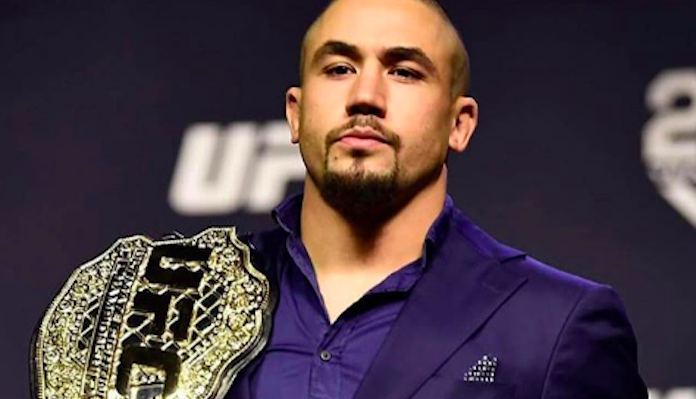 This past weekend’s UFC 236’s co-main event decided who will be the next challenger to undisputed middleweight king, Robert Whittaker. In the said bout, fellow ANZAC of Whittaker’s, Israel Adesanya would go on to defeat Kelvin Gastelum over the course of a five-round fight of the year candidate.

Originally, Gastelum was supposed to be the one facing Whittaker back in February but due to injuries on the champion’s end, Adesanya was able to capitalize on the opportunities that were presented.

As amazing as a back and forth fight that it was, ‘The Reaper’ didn’t learn anything he didn’t already know from watching the interim title fight.

“Nothing new at all,” Whittaker told Submission Radio. “I feel that that fight showed exactly what I’ve been saying the whole time. I think he’s (Adesanya) great, but he doesn’t like getting hit, he doesn’t look great going backwards, and I just don’t think he’s as good as he thinks he is. Like *laughs*, let me be clear, that’s not putting it on him, because I know he gets very upset whenever I say anything negative about him *laughs*, but I’m saying it was a great fight, he showed a lot of heart and technically he’s amazing, but yeah, he got hit, he got hit and he got hurt. And if Gastelum can hit and hurt him, I can hit and hurt him.

“Definitely, [Gastelum would have been a harder fight for me]. Now, I’m not saying that Adesanya is an easy fight for me. I think stylistically he matches up much better with my own style. Stylistically, I always wanted to fight Adesanya. Gastelum is just a keg. He’s a keg. When I was watching him fight Adesanya, that’s the fight that I was expecting when I was gonna fight Gastelum. Like, that’s the fight I had prepped for 12 weeks, and like, that’s the fight I had in mind when I was almost gonna fight him in Melbourne. And I’m happy, I’m very happy Adesanya had that fight *laughs*.”

For Whittaker, his last time out came in June 2018 when he fought and defeated Yoel Romero for the second time in back to back fights. This fight was also a fight of the year candidate.

Since then, Adesanya has fought four times against his stiffest competition yet. Having been in two consecutive wars himself, Whittaker understands how much fighting frequently can take its toll on someone despite having not been his most active in recent years.

“Fighting takes a lot out of you, and a fight like that with Gastelum takes a lot of you,” Whittaker said. “A lot, a lot out of you. And yeah, your neural systems go to places they shouldn’t in fight situations. It’s very intense, and I think fighting this much will start to wear him down. I think it will start to show. I feel like it started to show in the Gastelum fight.

Regardless, the undisputed champ doesn’t see the pair’s unification bout being all too taxing of an affair.

“Nah, it won’t be a war,” Whittaker stated. “Not with me and him. It’s gonna be short and sweet, brother, trust me. Oh, I guarantee you, I guarantee you [it’s going to be one-sided].”