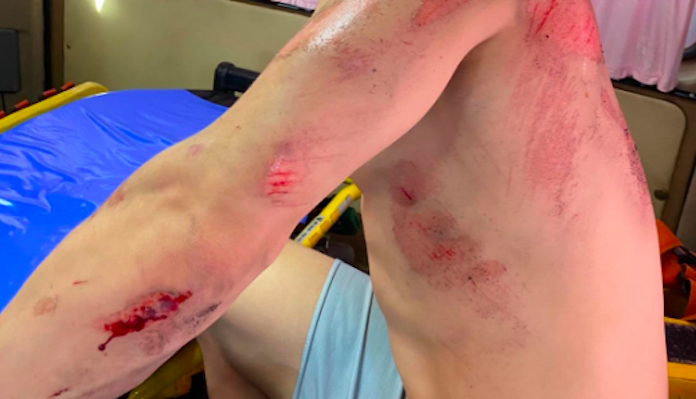 Movsar Evloev is out of his scheduled fight against Jamall Emmers at UFC 248 as a result of a nasty motorcycle crash.

The big event next weekend will take place in Las Vegas, Nevada with the headline bout being Israel Adesanya vs. Yoel Romero for the UFC Middleweight Championship. Further down the card, though, many fans were intrigued by the possibility of seeing Evloev square off with Emmers on the prelims.

That fight will no longer take place, with a photo being released of Evloev’s injury that he suffered in the aforementioned motorcycle accident.

Movsar had to pull out because of road accident. Car crashed into his motorbike. https://t.co/N8rZ2gjIB8 pic.twitter.com/mBPO7DiPuM

MMA Junkie had previously reported that Evloev was out of the fight with the replacement being Giga Chikadze, but at that time, it wasn’t clear as to why the switch had been made.

Emmers had initially accepted the opportunity to fight on the card on short notice, and now, you could argue that there is a level playing field with Chikadze also not being given a whole lot of time to prepare for the bout.

Movsar Evloev was coming into the fight with a whole lot of confidence with a 12-0 record to his name and two decision wins in the UFC already. Now, however, he’ll have to go back to the drawing board as we wait and see just how long he’s going to be out of action due to the accident.

In the past we’ve seen Dana White be a little bit hesitant when it comes to allowing fighters to ride around on motorcycles, with a few previous incidents obviously clouding his judgment on the matter.

While this has been the first in a while, it wouldn’t be all too surprising to see him come out once again and discourage fighters from using that particular mode of transportation in the lead up to a big fight.