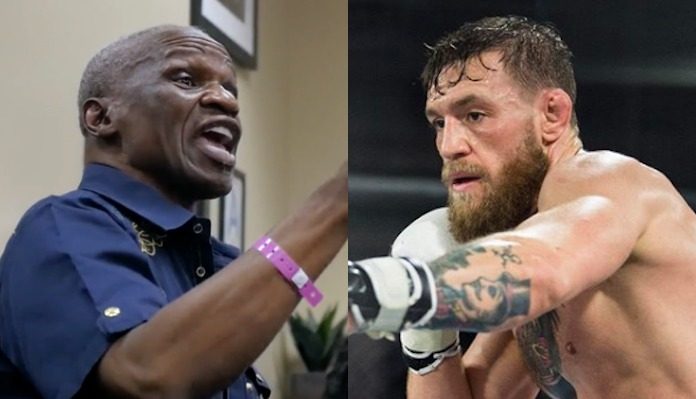 McGregor lost to Dustin Poirier via first-round TKO (doctor stoppage) in the main event of this past Saturday’s UFC 264 pay-per-view card. The Irishman apparently had a pre-existing injury coming into the bout, according to his coach John Kavanagh, and whatever it was, it appeared to be re-aggravated during the fight when McGregor’s kick was blocked by Poirier’s elbow. Not long after that, McGregor collapsed and then got finished. The stoppage has been made into a meme by plenty of fans and now even Mayweather is taking part in the fun, as he took to his social media to poke fun at his former rival.

Days after sharing his winning bet on Poirier, Mayweather continued to troll McGregor. Take a look at the hilarious photo that Mayweather posted of McGregor on his Instagram.

Y’all got it twisted! I like how his shoes fit. Now, do the stanky leg

Mayweather and McGregor fought in boxing four years ago, with the legendary boxer winning in the 10th round via TKO. The two rivals have long been connected to a rematch in the year since then, but nothing has ever come out of that. With Mayweather now 44 years old and busy taking exhibition fights against the likes of Logan Paul, it feels like a fight against someone like McGregor is mostly out of the realm of possibility at this point, particularly since McGregor suffered such a terrible injury in the Poirier fight. Still, considering how much money Mayweather and McGregor made for their 2017 boxing match, you can’t completely rule out a potential rematch between these two one day.

Do you think we will ever see a rematch between Floyd Mayweather and Conor McGregor?